Santa Came Early! Why I Chose a Babylock 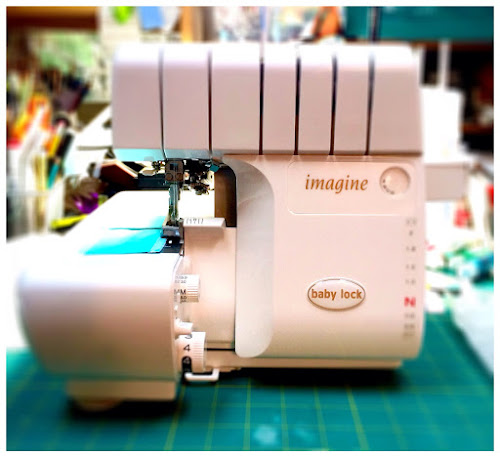 After several years of serger lust Santa came early - delivering my wish for a Babylock Imagine serger. A good friend gently seemed to suggest that I explain why I chose this brand and model. Babylock air threaded sergers dorank as the more expensive models and many brands offer excellent sergers at a much lower price point. So why Babylock and why an air threaded Imagine?

My first-and only- previous serger was a circa 1992 Pfaff Hobbylock 788. My sewing life went into an almost "quilts only" phase not long after making this purchase and making a few fleece garments (that I still use!). At this point having a serger that I liked using became a rather moot point.

However, after reading some influential books about "fast fashion" I became interested in making clothes again a couple of years ago though. Usiing a serger returned to the "front burner". The Pfaff is a solid machine; well built and sturdy. From the 'get-go' however, I had fits with the looper threading and tensioning issues were omnipresent. We never really connected.

I did finally drag out the Pfaff, determined that, in the absense of a new machine, I would make use of what I had. I wrote a post about my triumph here. I still had tension issues but had finally overcome my "looper-phobia". Oddly enough I found a you-tube video that FINALLY explained the part that had me flummoxed for all these years. The manual for the Pfaff was less than stellar and the video really clarified what the manual missed. Tensioning was still a mystery...it seems to change with each stitch and I suppose I just did not have any left over patience to figure it all out. It was serviceable but not something that I enjoyed and I found myself shying away from trying patterns that called for knit fabrics.

No you don't HAVE to use a serger to sew knits but using one does make make the sewing easier and cleaner.

So, my Babylock lust simmered. I was tempted to buy a used model last year from Quality Sewing, but the yellowed plastic made me think twice and turn away. I looked at used Babylocks and various models on places like EBAY...but never really made that jump. It is a hassle to get from where I live to a repair shop and I feared buying someone's "not quite perfect" machine and having to get it to the mainland for tweaking. I decided that waiting to be able to buy a new one was a better bet. It is unlikely that I will buy another one in my lifetime...so I wanted the choice to be 'the right one' for me.

I think that sergers in general have become far more user friendly in the years since I bought the Pfaff, but until very recently, Babylock was the only one that offered:

and yes, you do pay a premium for those features! Juki recently came out with the MO1000 model which runs about $400- 500 less that the Babylock Imagine and DOES now have air threading loopers, but does not offer the auto thread tensioning feature. I was VERY tempted by the JUKI, but was unable to try one out and I could not find many reviews of it.

I decided that the Babylock was still my top choice. By now (this model has a long success history) any necessary tweaks have been worked out with the Imagine, which is priced at the lower end of their air-threaded serger/coverlock line, but suits my needs perfectly.

It seemed rather selfish to want a serger that costs what a great, feature loaded, 'regular' sewing machine might cost, but I have to remember that I tend not to use machines that I don't work well with...and for the features I wanted the Babylock won hands down.

Why yes, of course, I did go and snatch up a long wanted piece of deep plum ponte from Emma One Sock and a luscious heatherd red knit from Sawyer Brook. I am really looking forward to stretching my sewing skills, learning new techniques, using fabrics that I have shied away from in the past and to becoming fast friends with my new machine. It was worth the wait!