Friend Judy H. posted about this swap on her blog and I had to have a look at Musings On Reality's swap. I had to add my name to the list as well. I did one other post card swap like this and it was wonderful to get art cards from all over the world to add to my growing collection! Have a look and consider joining in the fun, The more the merrier - or should I say "the art-ier ?!
on December 25, 2011 3 comments:
Email ThisBlogThis!Share to TwitterShare to FacebookShare to Pinterest
Labels: art2mail, mail art, mixed media postcard swap

Wishing You Love, Laughter and A Bit Of Santa-Magic 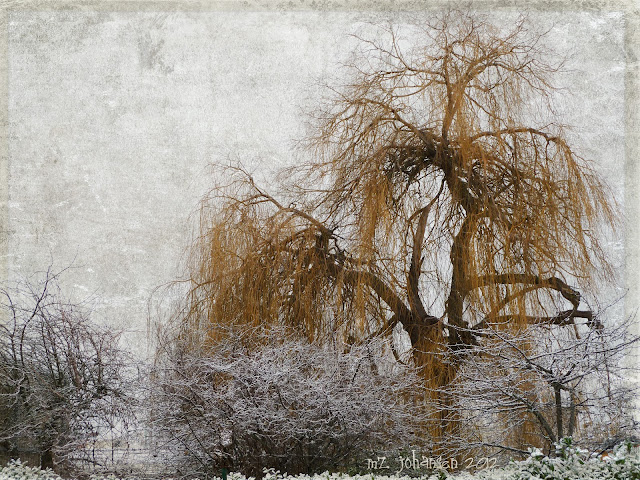 As this new day dawns
I wish you all a Season of Love,
Laughter and a bit of 'Santa-Magic'.
My wish for everyone is that
the New Year will bring you peace and prosperity and a surfeit of creative energy!

"Clouds appear
and bring to men
a chance to rest
from looking at the moon."
on December 25, 2011 No comments:
Email ThisBlogThis!Share to TwitterShare to FacebookShare to Pinterest
Labels: holiday wishes, winter willow

Local Craft Supply Access Can Be A Wonderful Thing! Plus My Home When I Am Not At Home ! 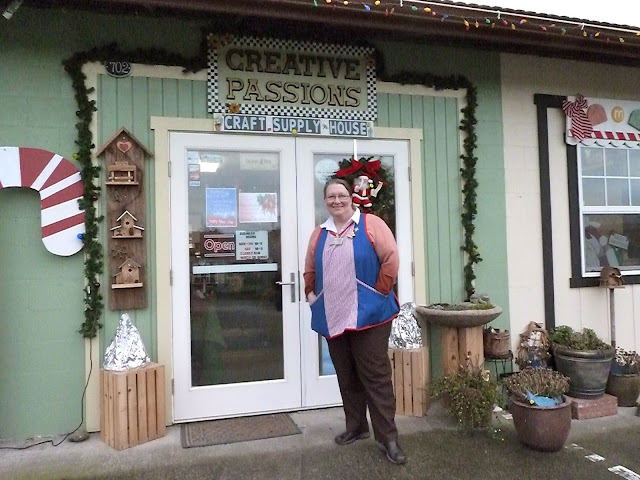 Most of you are aware that I live on a rural island. Going to a crafts store is an all day 'adventure' and the cost of the ferry service is making all but essential trips off island too costly. My friend, Janet, had told me that a new store had opened on island and that I needed to go and check it out. Of course, me being the laggard I can be, it took until yesterday to go and have a gander. I was thrilled to see a varied selection of many crafting essentials. From card making and scrapbooking to knitting, quilting, painting and paper crafts, we now have a pace to call home in our small community - and it is a very joyful thing ! Shop owner, Bonnie Turman, is ready and willing to help you find the tools you're looking for and is open to suggestions about what to add. She is already making plans to expand her shop! She stocks products from Fiskars, Ranger, Red Heart, and many other well know craft companies. Finally we have a local place to get our essentials - I breathed a sigh of relief as I left the shop - with a wee package in my hand I should add!  Thanks Bonnie - I hope you are swamped with business!

As I looked around my office yesterday I thought about what a nice space three of us are able to enjoy. In my most humble opinion we have the loveliest office in the County and, if I can't be home, this is a very decent second choice. Note that you can double click on these photos for a larger view (at least I hope you can!)

Happy Solstice To All ! .... and Walnut Inks From Tsukinenko

Late in November my friend Lauren and I took a girl's day off island and hit some of the art supply places that  we occasionally miss being able to visit as much as we treasure our remote island life. I had been remarkable resolute with my plan to spend money judiciously - at least I had been prior to this visit to Michael's! 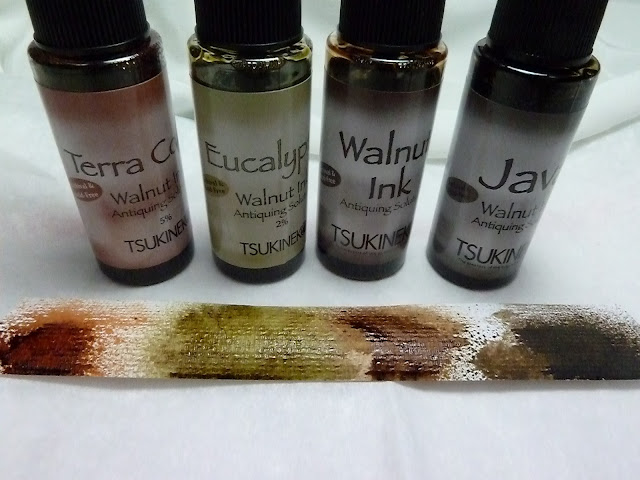 I had seen these Walnut Inks from Tsukinenko before and had passed over them thinking that were in, in all actuality, walnut inks - the sort I am familiar with using with dip pens. This time however, I took a look at the box this set came in and decided to give them a try. This was just my first look at the inks on paper and I can see some real play time int he future. They result in beautiful, rich colors in the warm, earthy tones I love. I'll share some play time soon but if you too have passed over these inks in the past you might consider trying a bottle. This set had, in order of the photo below: Terra -cotta, Eucalyptus, Walnut & Java. 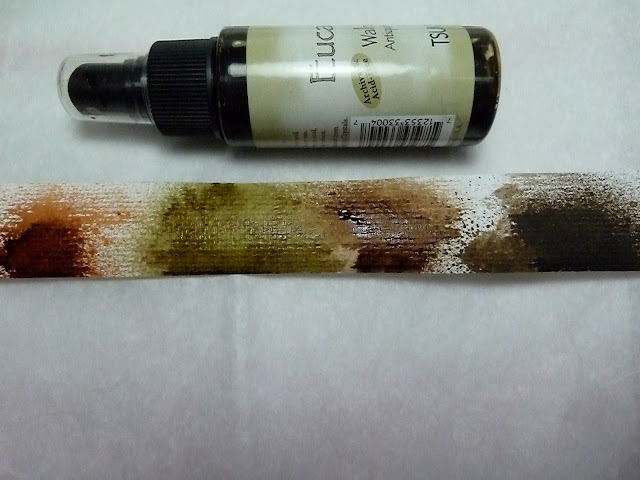 My Xmas gift this year is a doozie - a new Apple I Mac. I had been dreaming about having one for so long! It arrived yesterday and, at the behest of DH, I opened it and got the migration assistant going - so I thought! According to the assistant I had about 14 hours to wait - so when I went to bed I envisioned that all would be well when I woke up.

When I woke up there was "blue bar" progress but it now read that it would take 56 house and 19 minutes. I decided that something had to be wrong and so I called tech support. My neck began to ache as the hours online with tech grew longer. After a couple of trouble shooting hours he thought that we/I was on the right track - and decided that he would call be back later to check on things. I made progress on migrating things onto the new computer with the help of a flash drive. Mail worked, Internet worked - I was beginning to be happy.

When the tech called again though we ran some diagnostic and discovered that there was only one hard drive on the machine - there were supposed to be two - one smaller and one very large.

Bottom line. I have wasted an entire day off fiddling with this beauty only to find that it has to be returned. Maybe I will have a new computer by Xmas - maybe not. It really is a drag - but there are silver linings too. I found a problem with the hard drive of my Mac Book Pro (which could have caused serious problems in the future had we not discovered it). It is now repaired and, by opening my Xmas gift early I gave myself a chance to still have the new one in time for the holiday.  If I had waited to open this until Xmas I would  have spent a very frustrating holiday indeed. So - although it was an irritating day filled with wasted effort in the long run it probably worked out for the best.

One thing I tell you though is that this 27" screen is absolutely stunning. You can have four full sized windows operating at the same time. I had wanted get the smaller screen but the options I wanted were only available on this new monster screen. It's brilliant and beautiful - and I think I will like it very well ! 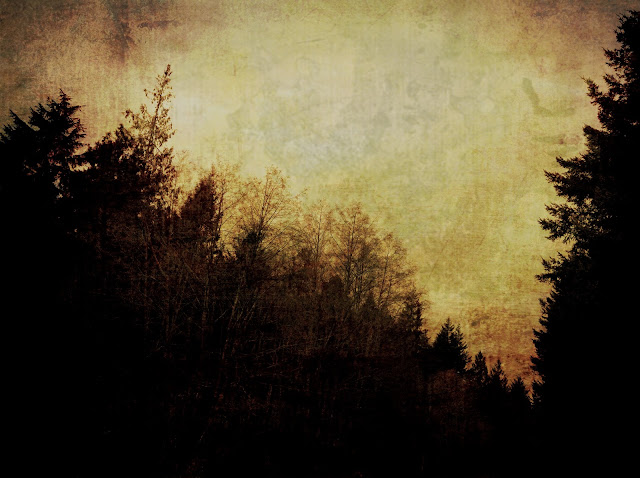 I've been admiring the winter look on the land this week. The colors, though muted for the season seem so sensuous and rich - a deep gold played against the evergreen or bare white branches against the skyline.

As I was driving home one afternoon this week I noticed the way the sky looked framed by the gentle bare branches of the winter woods. I had to stop and take a picture. It was such a beautiful sight.

Happy weekend to all and to all a good night !
on December 09, 2011 1 comment:
Email ThisBlogThis!Share to TwitterShare to FacebookShare to Pinterest 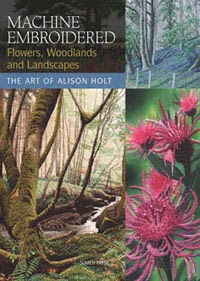 
This is a cross post from my book blog - I had to share it here to because I love this book so much!

For anyone who loves the work of Annamieke Mein or Jane Hall you're in for a treat with this latest book from Alison Holt.  Lush and beautiful are words that just don't quite describe this book that is part eye-candy and part super well done instruction. 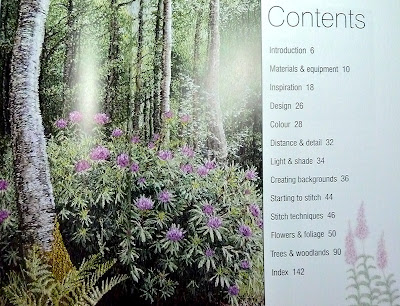 This is a book that is really about the art of 'seeing' and translating what you see into poetry made with thread. The instructional part of the book is very well written, with excellent photographs that illustrate the process very well. Search Press has always, in my opinion, spotted good books and publishes them to their full, beautiful, potential. 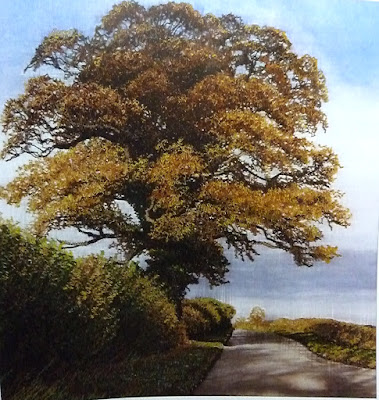 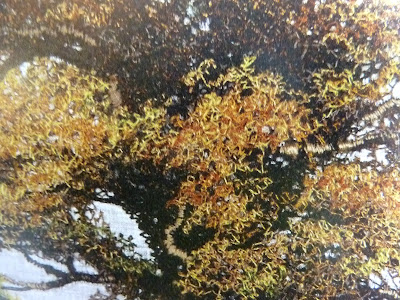 I am, indeed, quite excited about this book and I know that it will be a "keeper" for. me. I think that it will have wide appeal since many of the techniques can be translated into hand embroidery if desired. Artists, quilters, embroiderers, textile and fiber artists alike will find something to tickle their imagination in the pages of this beautiful book. I can do nothing but highly recommend this gorgeous publication! 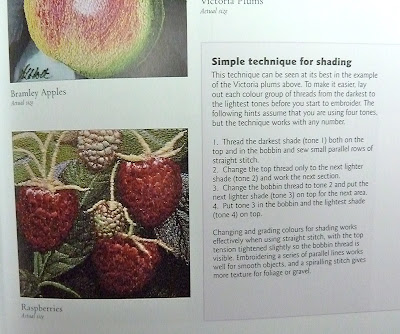 I could go on describing this book - but I do believe that a picture is worth a thousand words and, hopefully, these photos, will tempt you to add this to your own 'keeper" library! 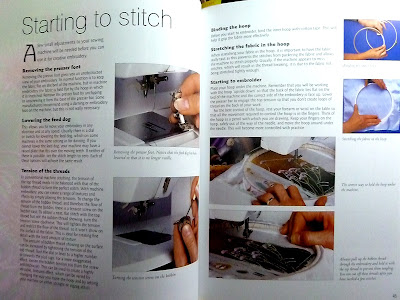 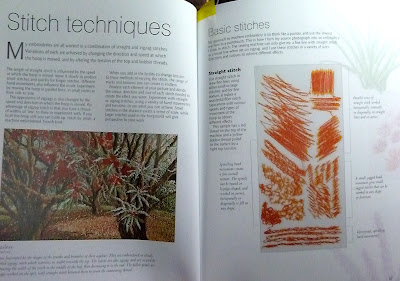 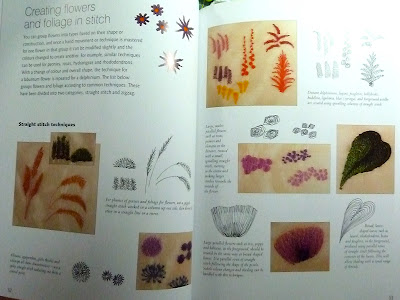 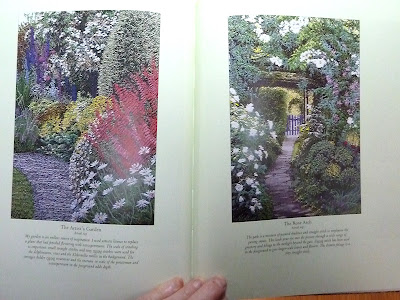 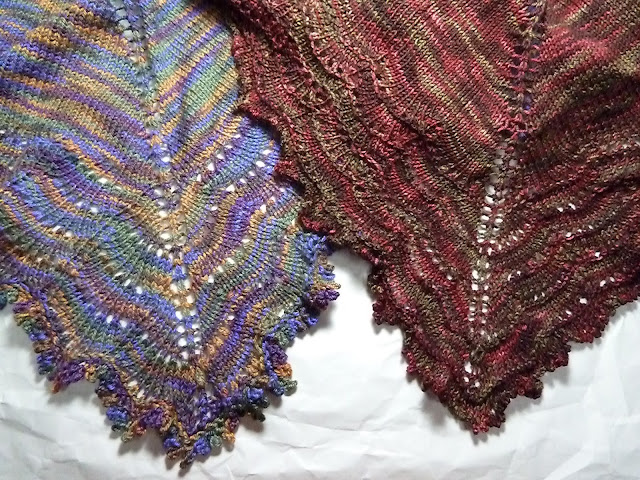 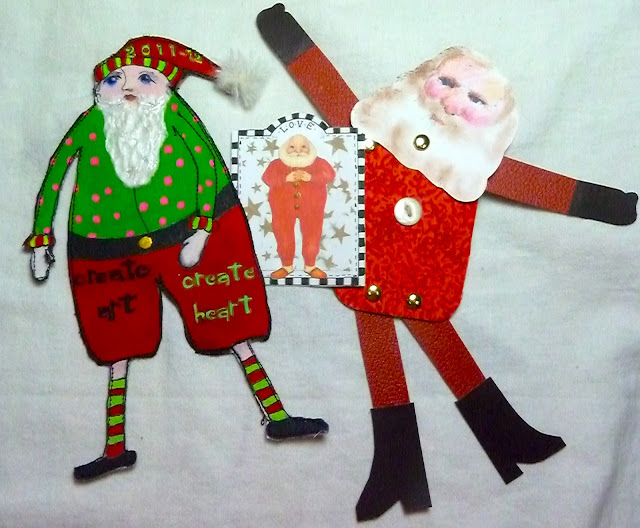 The Arts In The Cards group that I belong too had a voluntary swap for December. Some members really needed a break but some of us decided to Santa up for a "Flat Santa" challenge. I had no idea what that meant until I was told of the popular children's book called Flat Stanley. My Flat Santa is on the left and he is about 8" tall Friend Karen Musgrave made the middle Santa which is totally adorable and Janice Paine Dawes made the articulated limb-ed Flat Santa on the right.
on December 04, 2011 5 comments:
Email ThisBlogThis!Share to TwitterShare to FacebookShare to Pinterest
Labels: ATC trade, flat santa, Holden Shawlette, knitting, lace shawl, shawls
Newer Posts Older Posts Home
Subscribe to: Posts (Atom)