It seems that September passed me by - at least in the blogging sense. One friend said that she had stopped checking in because it had been so long. I plea guilty! 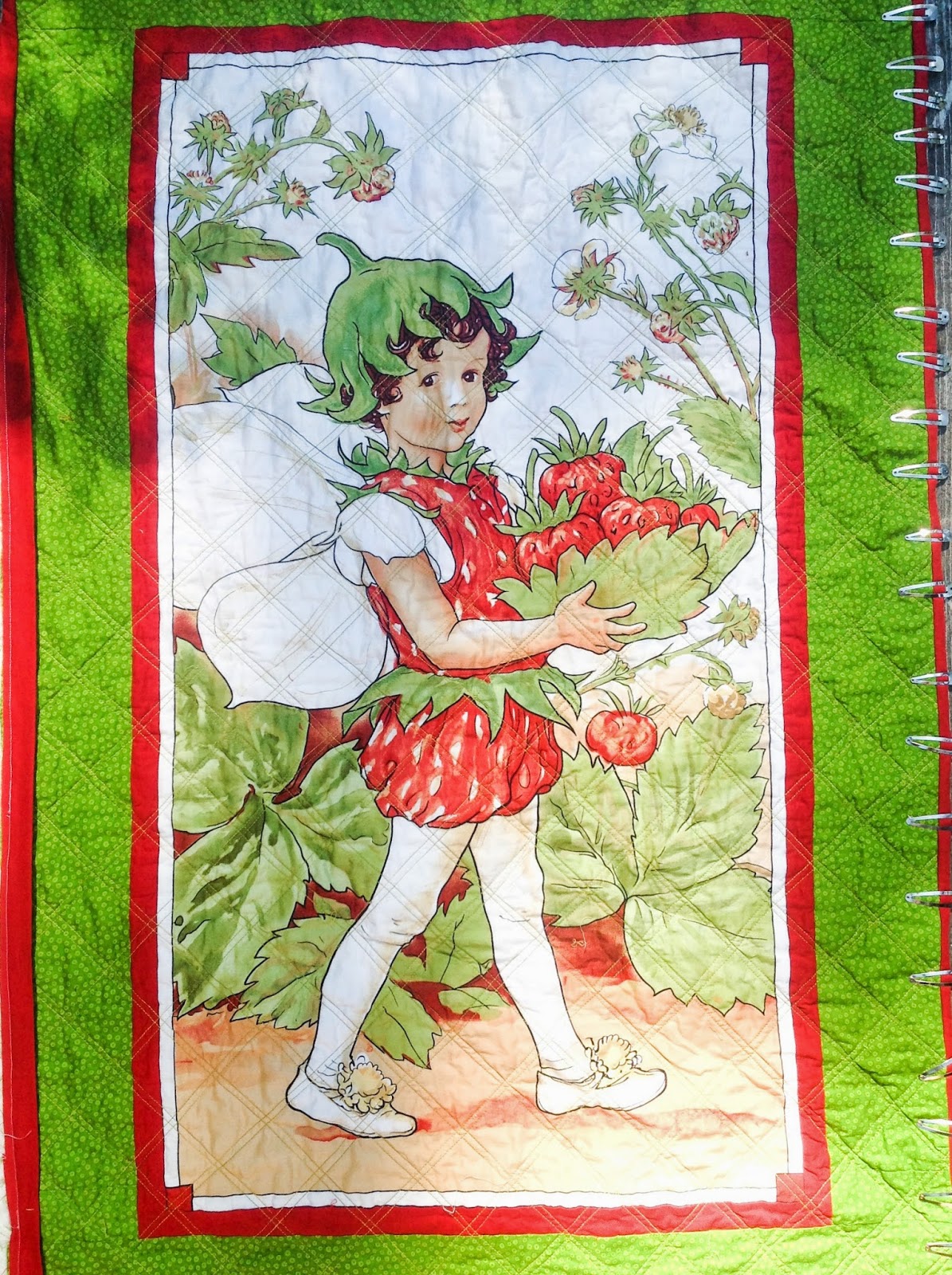 I have been on a bit of a social networking slow down. It began in early September. When I went on a retreat for a few days in mid-September I inadvertently forgot BOTH my cell phone as well as my IPad (which had all of my knitting patterns on it). I had to borrow a phone to check in with home every day, which was an embarrassment. I think that I can pretty much guarantee that I won't forget my phone again! That weekend set the tone for my media slow down though. I barely glanced at FaceBook or any other social networking site all month. I did not feel as though I was missing a lot though and that surprised me a little. I just found a bit more time in the day to actually work!

Hopefully, these images will show that I was not being a total slug during the month. I imagine that much of this will be old hat news for some of you! 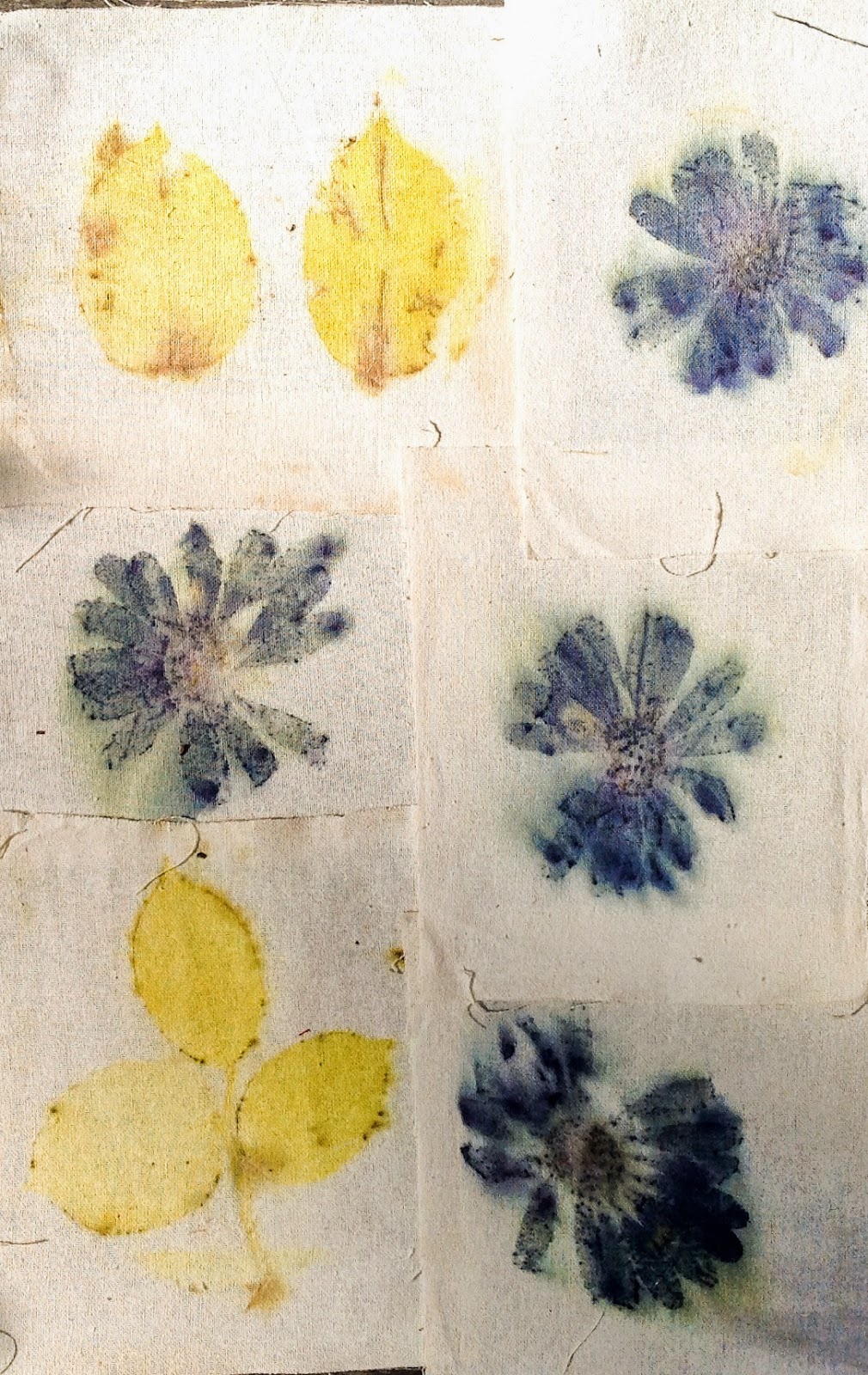 I continued with my leaf and flower printing experiments although I have to get back on the stick and catch some of the luscious fall colors that are popping out now. The leaves are Oregon Grape and the flower is a Zinnia type. The original color was a lush, brilliant, purple. My friend, Lauren, assures me that she has the tag from them so that I can grow some next year! 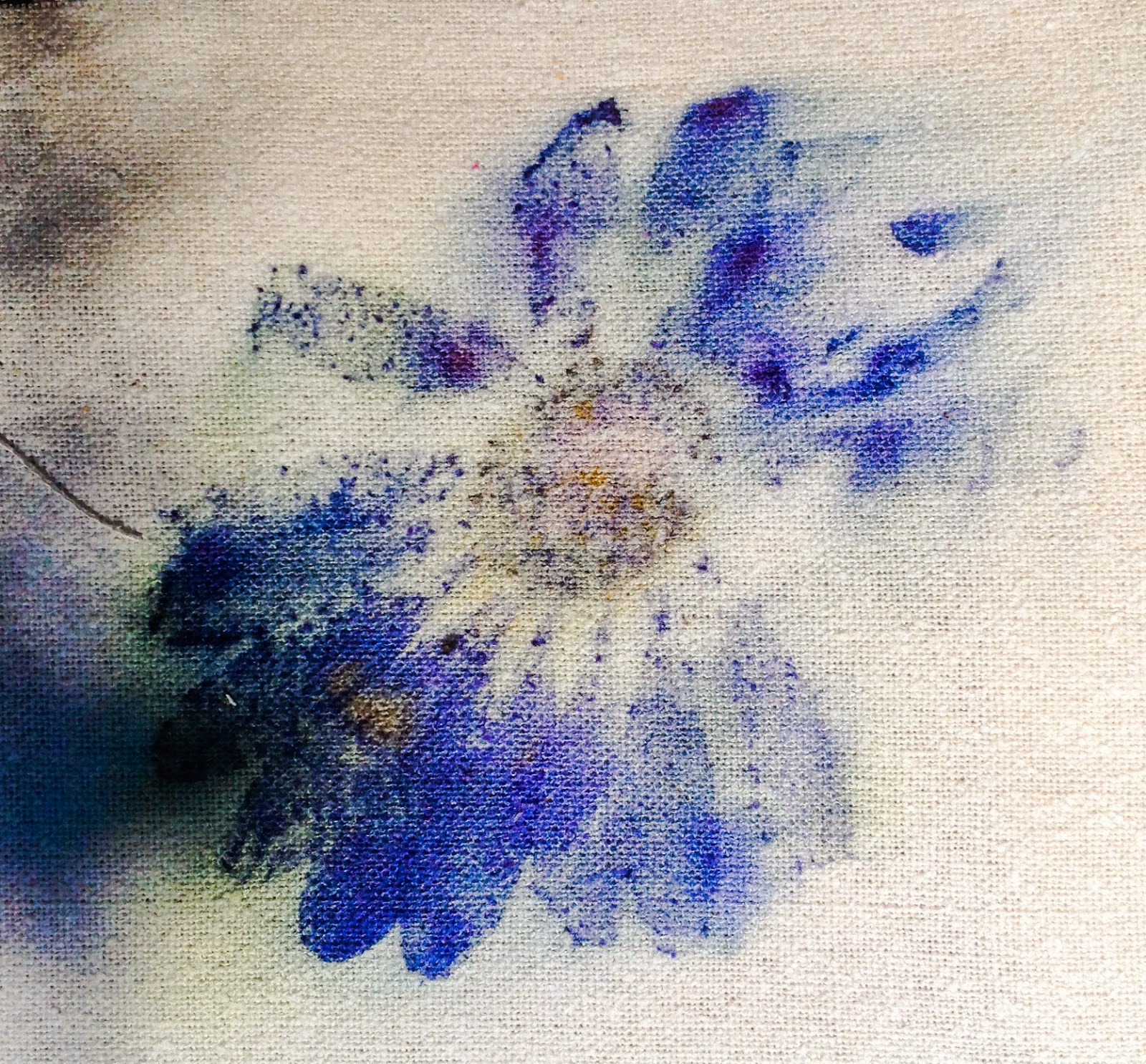 Mid month featured our annual retreat. Considering that I had only begun to get out and about again a week or two before this event I was thrilled to feel well enough to go. I did overdo just a bit but I simply HAD to make use of the spacious design walls at the retreat house. I took a few days to recover once I got home but I was so happy to have been there with good friends and laughter!
My project was this "fractured" quilt from the "Making Quilts" by Kathy Doughty. This quilt was made with 90% fabrics from my stash. I cleaned out all of my reds, yellows, oranges and blacks.  I can't fit the whole quilt into a photo, but the quilt is about 100" X 110" with it's black border (not shown here). I love using traditional fabrics in a slightly non-traditional way. 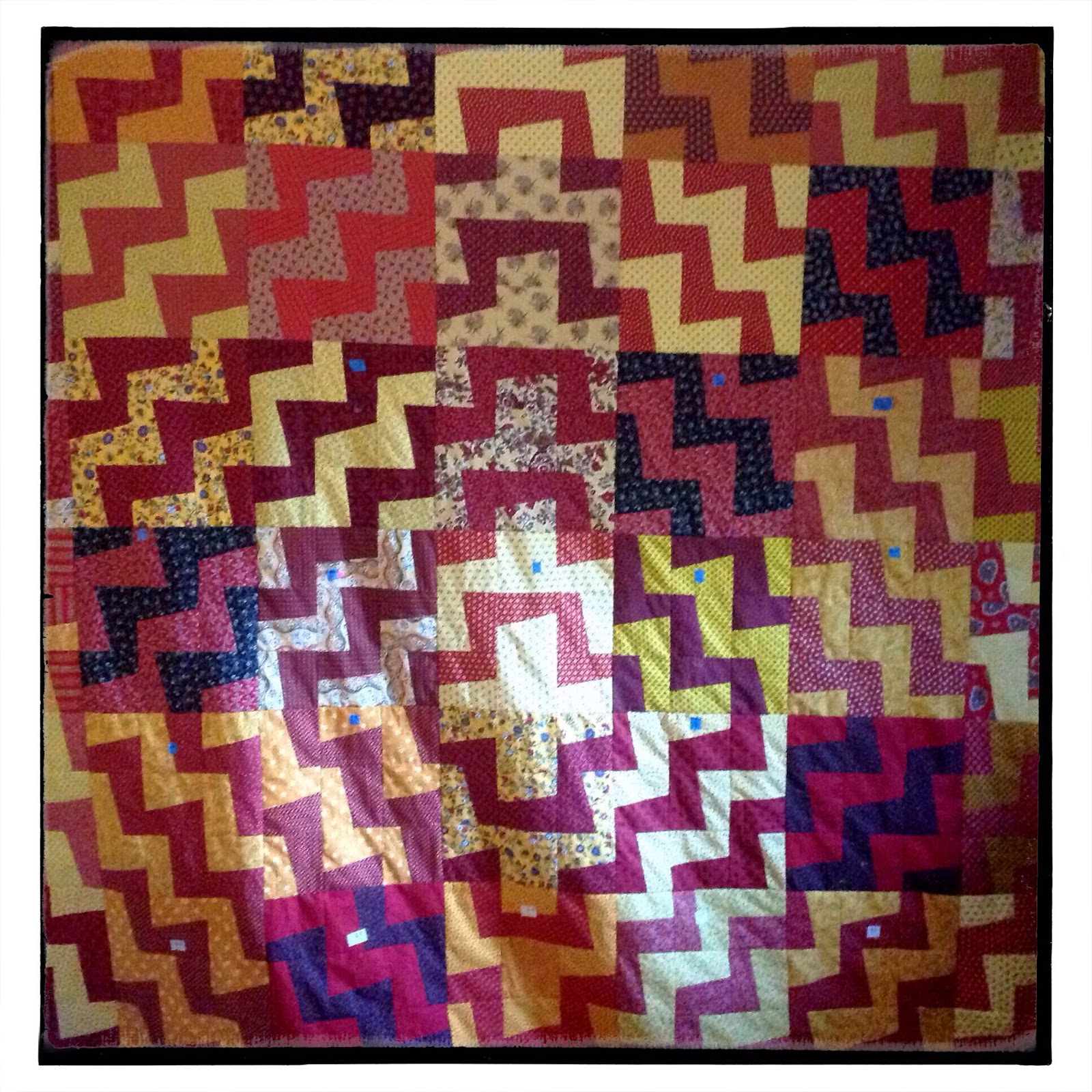 Below is a beautiful little gem made by friend, Janet Wright. I think that her use of the pattern and the colors all add up to a fresh, modern feel for this piece. We were all amazed at how the gradient border fabric (shown top and right) gave the impression of light coming in from an outside source. These amazing fabrics are from the E.E.Schenck Daiwabo Gradients line and I hope that they will not discontinue making them! 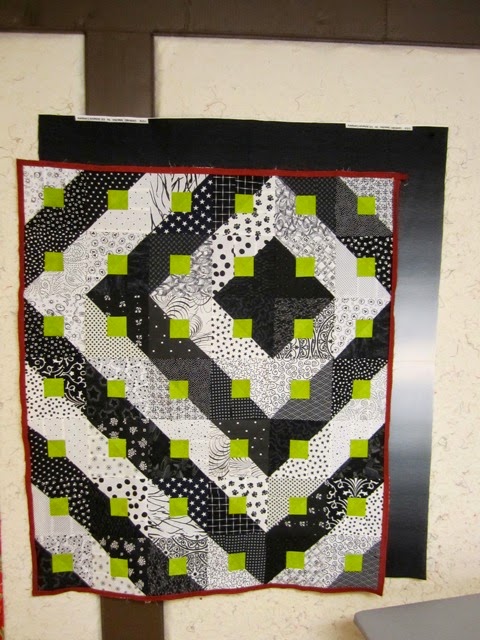 Below: This cheerful quilt was made by Tori Benz-Hillstrom. She considers herself to be a beginner quilter, but she has that natural ability  to do things right that has already made her an 'expert'. Aside from finishing this during our short 3 day stay she also pieced another whole 'sofa' sized top! 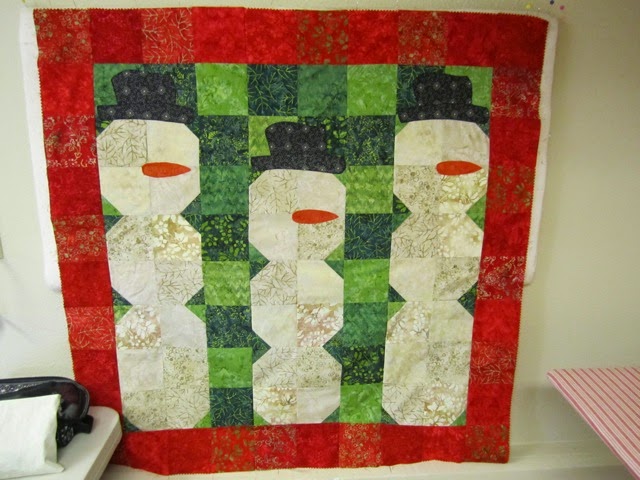 Below: Another friend, Judy, was making these special 60 degree (?) table runners. They requite a special tool (60 degree ruler?). She got Tori interested in making them too. I have to admit that they look really great don't they?! 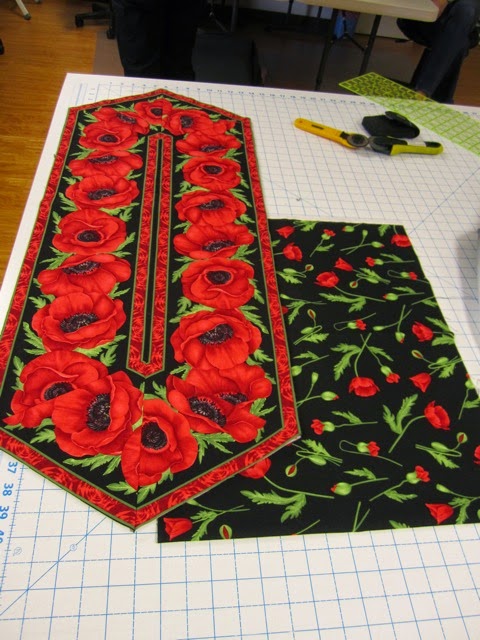 Below: Liz made this wonderful "Professional" tote bag.  had made one of these some years ago. The pattern is beautifully done. It's just of those that you need to follow precisely and not think too much about as you make it. Liz's tote came out looking professional indeed both in workmanship as well as in color scheme. 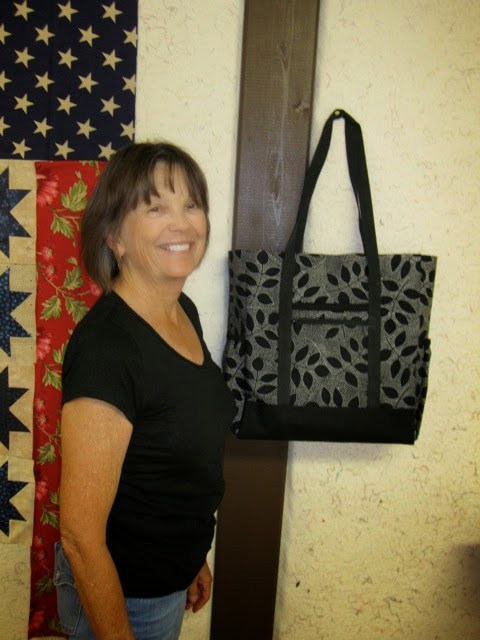 Not too long after our retreat I visited Liz and noticed this amazing quilt on the wall. She designed the crow patterns herself and cut them out meticulously. I am in love with this quilt and might be tempted to take it home with me. It is an amazing piece and I think that it deserves much more attention! 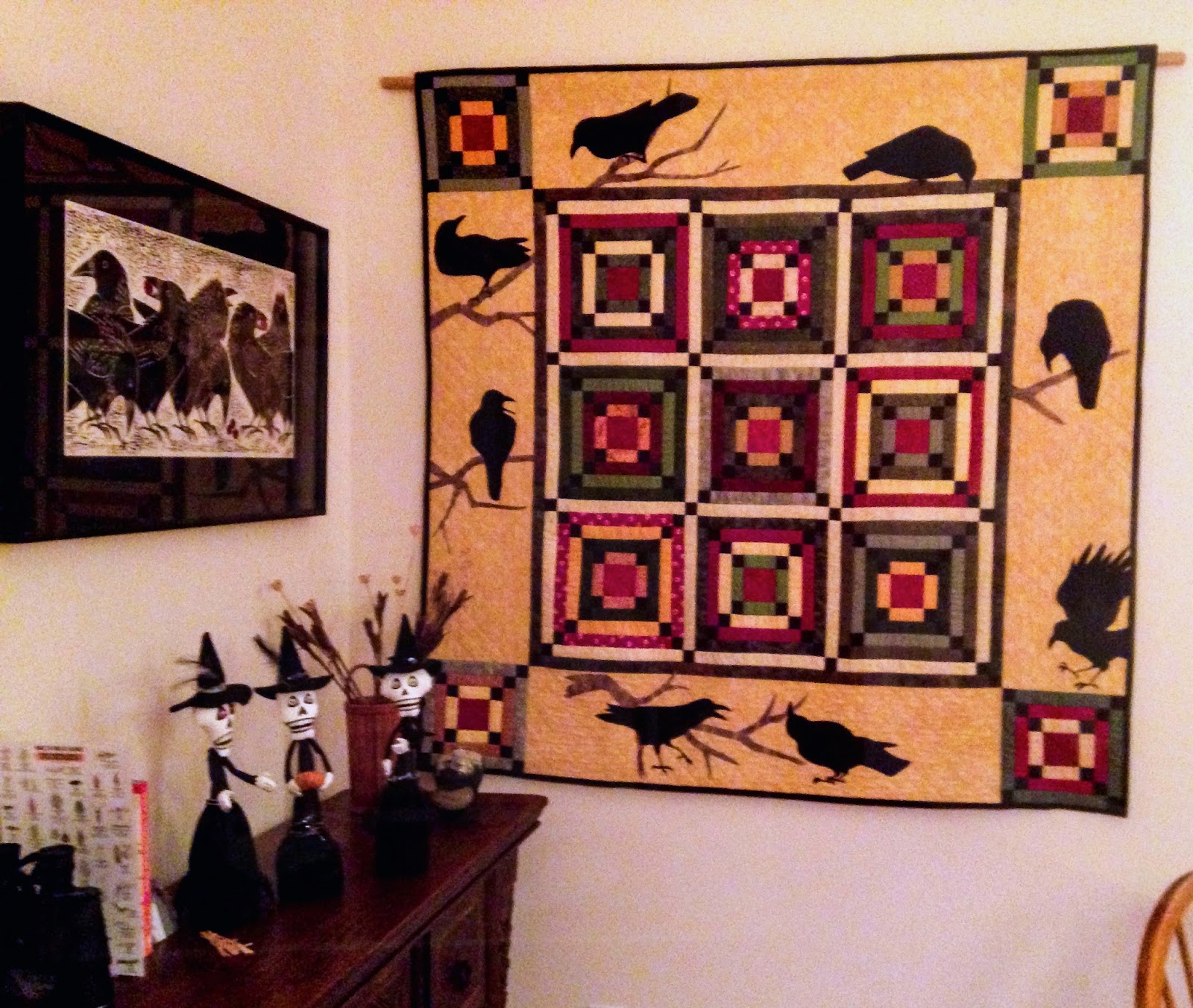 Also in September I participated in a Mystery Knit Along with Sivia Harding through Ravelry. This is called the "Liken Shawl" and the design was inspired when Sivia found a beautiful piece of shelf Lichen during a visit to my fair island. Of course, I had to make this shawl! This photo shows only the first two "Clues". I am almost finished with it now though and am anxious to have it blocked. For this I also used stash yarn! I love knitting with beads and this design presented ample opportunities for using them! 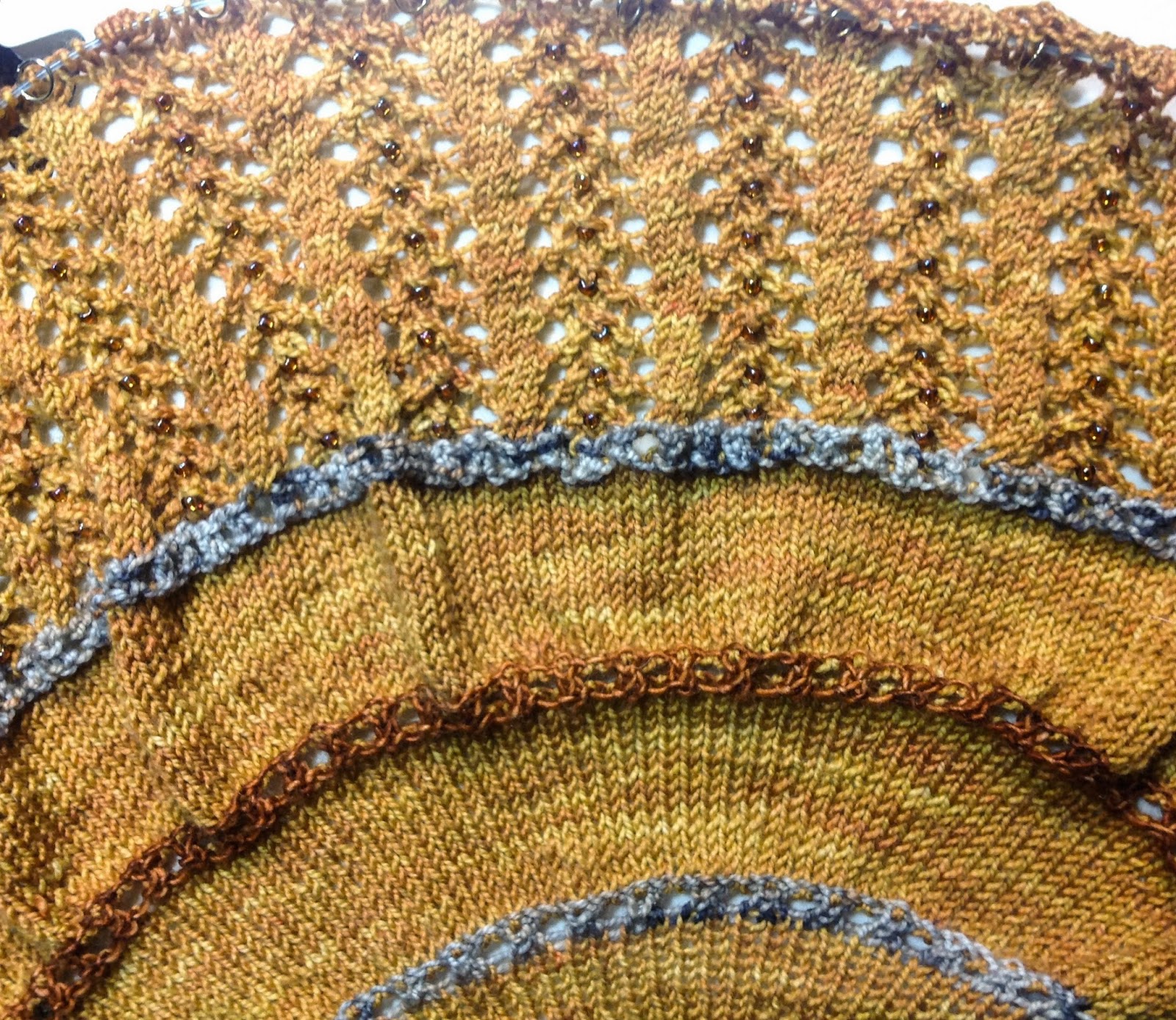 I have been using a crochet hook when I knit with beads. It worked alright, but I was always a bit frustrated that I had to keep dipping into the tin of beads. I was designing a beading hook in my head when I happened upon this excellent little contraption called the Fleegel Beader from Miss Babs. It is available in three different sizes to accommodate a variety of bead and yarn sizes. It holds a lot more beads and is a much easier alternative I think!

There is another model of beader called the Verna-X beader from one of my favorite beaded knit pattern vendors, Earthfaire (also available in different sizes). These beading needles are very similar. The Verna-X is a bit longer nd hence holds a few more beads. Foe me, the Fleegel seems just a bit easier to use, but it may be that my hands are small and so the shorter size feels more comfortable? If you like beading knits too do yourself a favor and have a look at these. They are both modestly priced. I think that they are made from guitar strings perhaps. I used pliers to add a tight scroll to the bottom below the rubber washer in case the washer slipped (which it seemed to do). 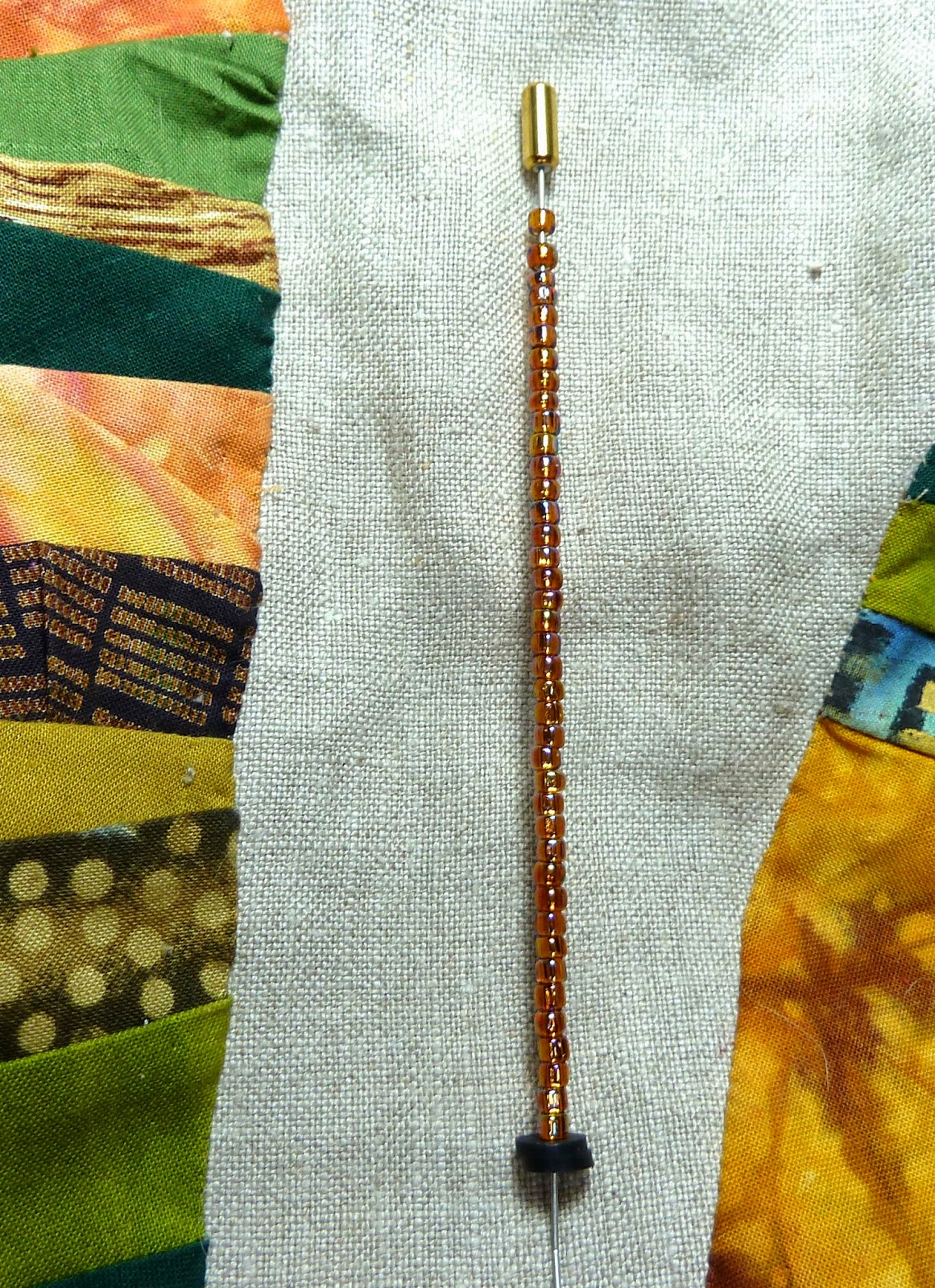 A few questions to ponder:

Lastly, if you have gotten all of this way and you happen to need a new set of Holbein Gouache paints - I happen to have one for sale. I accidentally placed a duplicate order. They came straight from Japan and this set is untouched - other than for taking the photo. I paid more than $50. but make me an offer if interested. I will be putting it on Etsy and Ebay shortly....
Here is a link to this set on Amazon 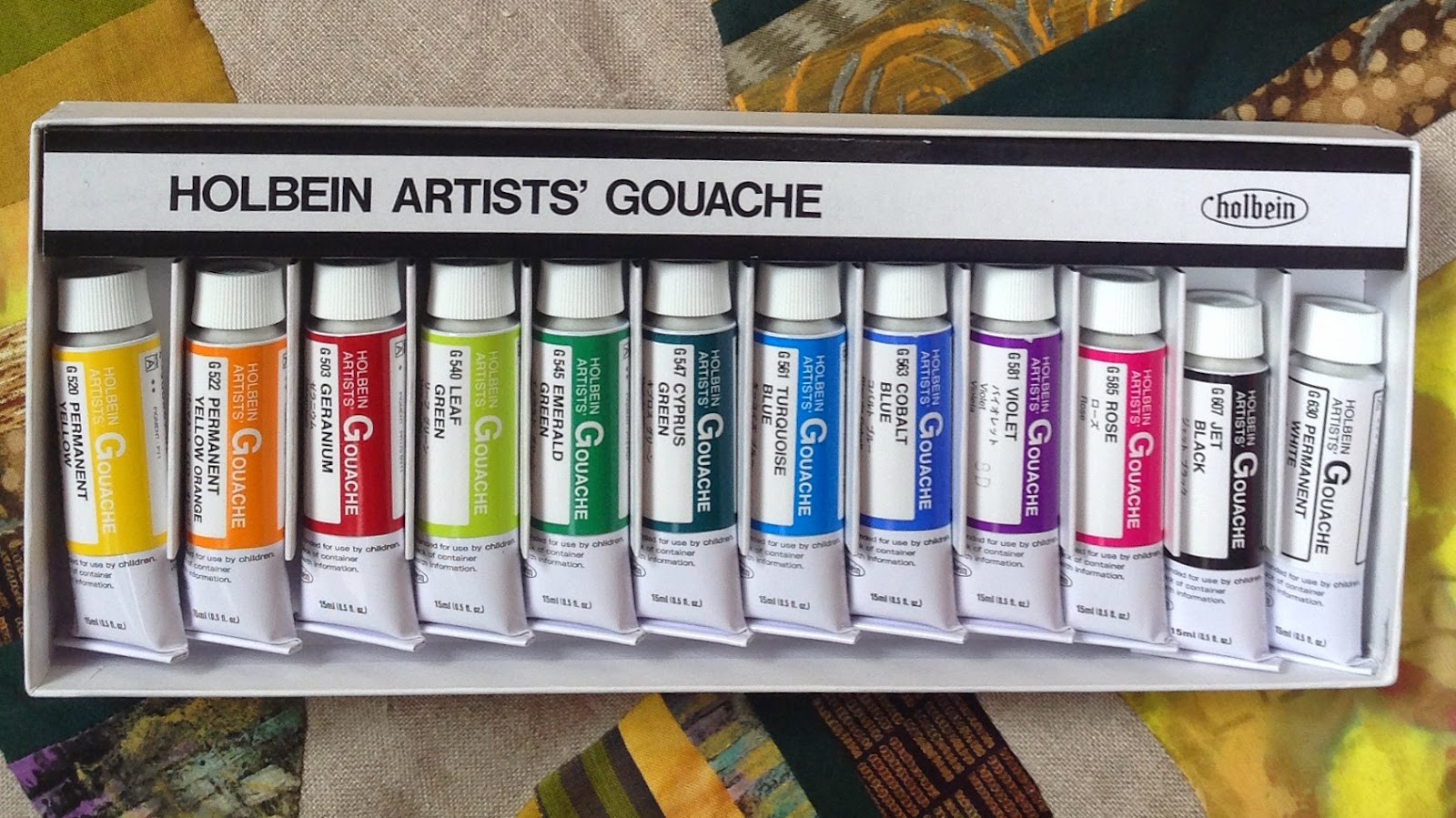