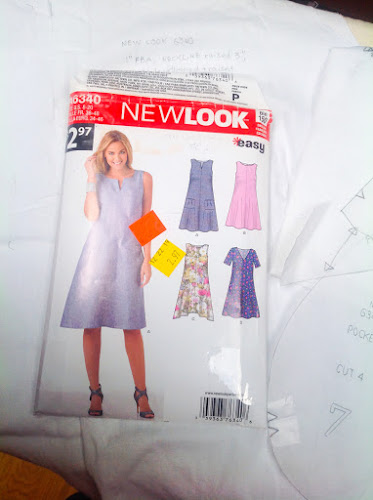 See this pattern envelope? It says that the pattern is "Easy". It was and it wasn't. In my continuing quest to integrate some v-necks into my wardrobe I decided to give this New Look 6340 a try. I liked the slightly floaty bottom section, a bit more fitted top and I like the side pockets a lot. Since the summer is waning I wanted to give this try while I still had some summery weather to enjoy wearing it. 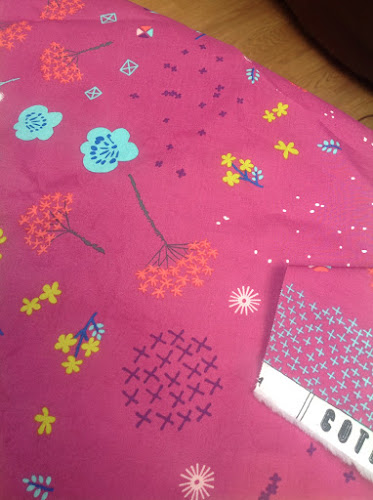 I used this lawn fabric from Cotton and Steel designed by Rashida Coleman -Hale and called "Mochi Floral". I purchased it on sale last April from an ETSY shop called Chateau Sew & Sew. I had a difficult time getting the colors right in the pictures that I took outdoors, but the image above is close to correct and shows the blues to advantage, while they seem to fade in the photos taken in sunlight and shade.

I have not seen many patterns from New Look and I decided that it would be prudent to make a muslin of the top part. I am glad that I did....in fact I ended up making FOUR muslins of the bodice sections until I got right. My shoulders remain fairly small in comparison to my "mature" bodice and waist measurements these days and I always find that I need to grade between sizes. I also chose this pattern to teach myself to how to construct and sew an FBA (full bust adjustment). It is something that I knew I had to learn to do sooner rather than later. Since most commercial patterns are designs for a B bust, doing an FBA can help garments hang better when you are off that size bra cup. Now, of course, I wonder why I hesitated to do it sooner. It wasn't at all difficult. Of course, because I made the FBA adjustment. I also ended up having to raiseand lengthen the bust darts. 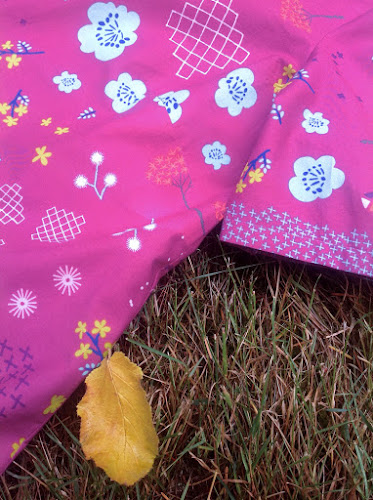 The other major challenge for me was that I raised the neckline by 2.5". Which meant that I had to re-draft the neck facings. Raising a neckline is generally quite simple and straightforward, but because I raised it so much it was a bit more of a challenge to get the proportions where I wanted them. I have never considered myself to be a prude, but I am not happy when I wear a v-neck that displays way too much when I bend over even a little bit. I just am not comfortable with it....and never have been even as a much younger woman. Yes, I would call myself modest when it comes to clothes!

After the fourth muslin it all fell into place. Unfortunately, since I was not able to wear the dress and get photos, you cannot see the fullness of the skirt section...in this view it looks much like my trip and true patterns. In reality, I suppose it is similar though.

I cut out a new pattern that had all of my changes and adjustments from Pellon 830 "Easy Pattern" and cut the fabric. I had bought a mini bolt of the Pellon to try as a less expensive alternative to Swedish Tracing Paper ( though WAWAK offers the lowest price anywhere for it and I happy to say that it is quite comparable...slightly thinner perhaps, but it works well. 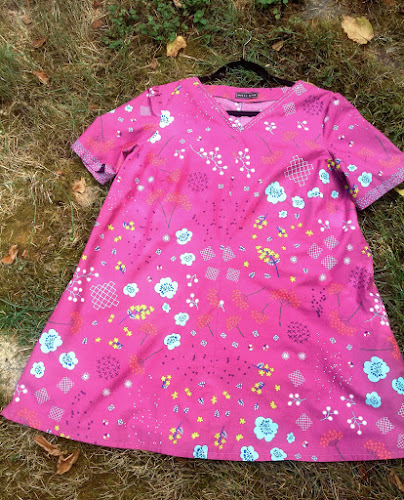 When I sew my projects seem to "talk" to me at times. Of course some would say that means I am crazy, while others may feel that it is the "voices" of creative play. I prefer that idea. Anyway, as I was sewing up this pattern I decided that the neckline was perfect for some "big stitch" embellishment. I started with a line of stitches 1-2" in from the neckline using a variegated blue-white Caron "Wildflowers thread. Then I decided it needed to be two lines instead. When that was done I looked for some beads to add. I had these lovely triangle beads from Beyond Beadery...they are white lined with a silver AB (aurora borealis) effect in size 11/0 (I also had 8/0 but preferred the smaller size) that twinkle nicely. I added them in between the big stitch gaps...just a bit of summer bling. 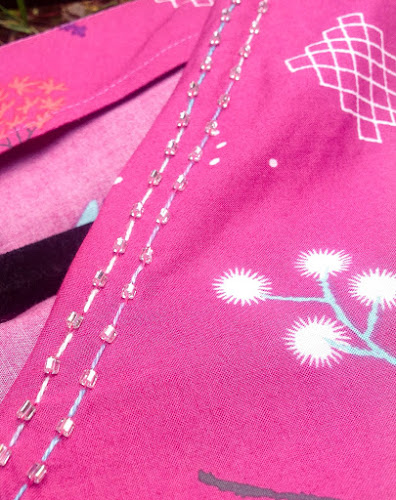 This simple pattern took me WAY more time than it should have, but I did learn a lot from it.

1. I am now comfortable with making an FBA. I had good results raising and lengthening the darts.

2. I successfully raised a neckline quite a lot and also had success in re-shaping the neck and re-drafting the facings.

3. I got to enjoy making multiple muslins of the top. I generally have only needed to make one muslin. I found making multiple muslins, although a bit tedious, teaches you a lot. It shows you how changing one piece of a pattern will require making other changes necessary...invaluable information in the long run. It saves a lot but not wasting more expensive fabric. I simply do not like using tissue paper patterns....especially for fitting issues.

4. I enjoyed the simple neckline embellishments. 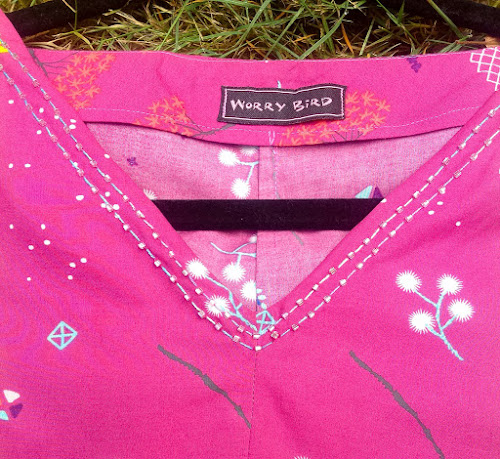 Are you a person who dislikes trying and trying until you get the "puzzle" worked out or are you a 'one time only' kind of sewer?

Do you enjoy fitting challenges or does it really turn you off to making clothes?

Do you have a favorite pattern company? Which one(s) and why???

Thanks so much for stopping by as I now return to my appliqué block adventures!