My Enduring Love Of Linen 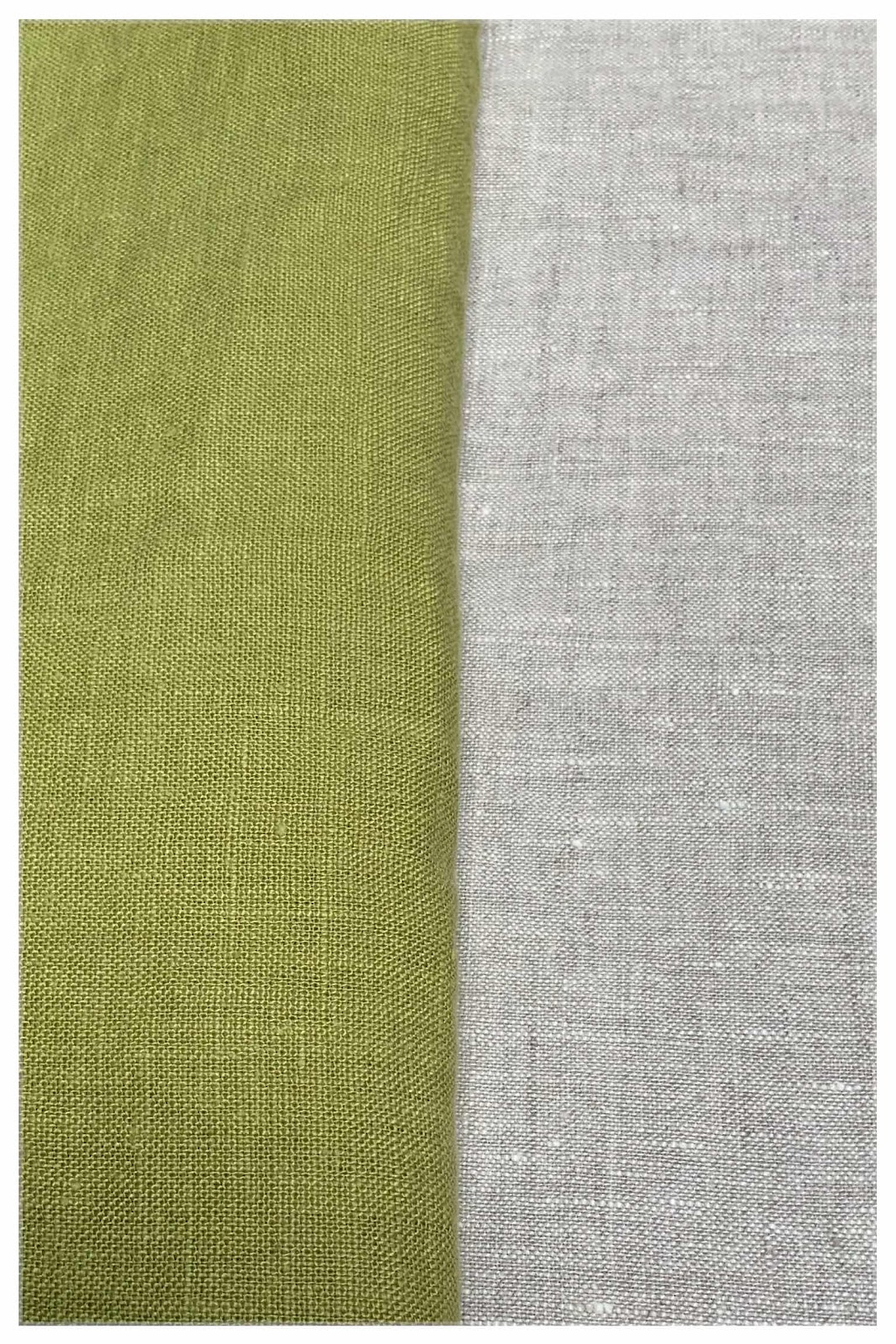 Yesterdays mail brought me some beautiful linen fabric from Fabrics-Store.com
Above: their IL019 (softened) in Oasis on the left & IL019 Mixed Natural on the right.
Linen. Oh how much I love it! I was late learning about the pleasures of linen. Growing up in the NorthEast I knew it as fine handkerchief linen...usually from Ireland. I had a flax spinning wheel at the time and spun some flax...it was frustratingly slow work! I did see the occasional lightweight, white linen summer shirt or pants, but the women in my families did not use linen much in their wardrobes. As I read more about linen apparel I realize that this might not have been that unusual.  One article states that in the 1970’s only 5% of the worlds linen production was used for apparel, but by the 1990’s that percentage had risen to a whopping 70%!
Linen is, of course, derived from the pretty, but tough, flax plant. 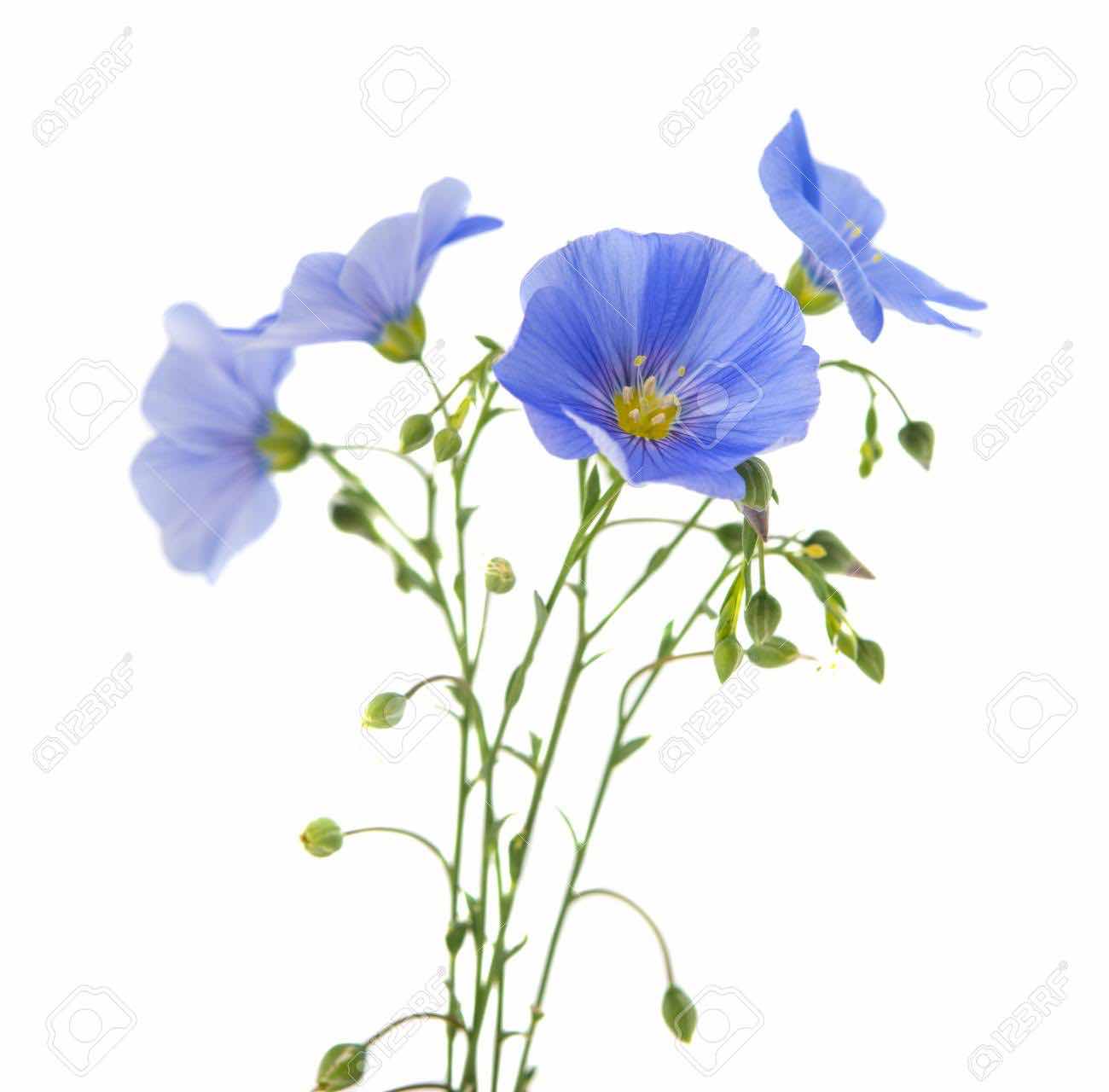 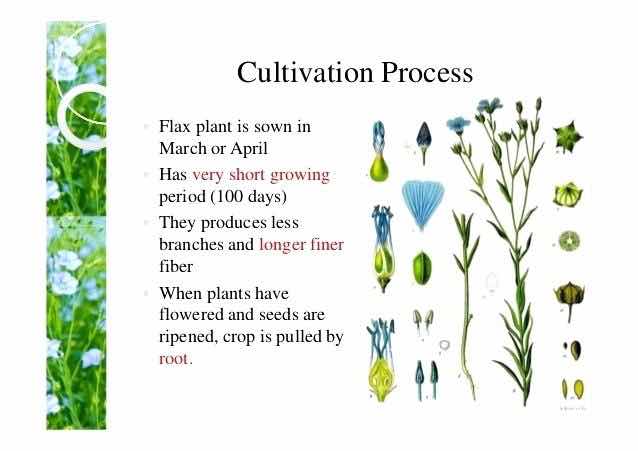 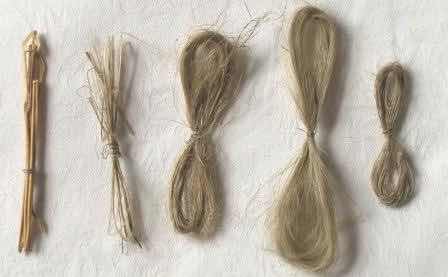 Above....from an excellent article on linen at
https://theswatchbook.offsetwarehouse.com/2015/01/26/series-on-fibres-how-is-linen-made/
I was in my early 40’s when a friend (Ingrid) gave me several pairs of linen pants that she had well loved. They were from Flax Designs linen pants and had been designed from Jeanne Englehart (who is no longer with the company). There was no turning back...I fell in love with the fabric and the simple designs that she made famous.
Linen is an ancient fabric, that has stood the tests of time. It is cool, versatile, softens with age and is simply one of nature’s best designs. An excellent article from “ clothing history” tells us that “...The Phoenicians, who had their merchant fleet, brought flax growing and the making of linen into Ireland”....who knew?! That same article relates “The longest possible fibers are got when the flax is either hand-harvested by pulling up the entire plant or when stalks are cut very close to the root. Seeds are then removed from the plant and fibers are loosened from the stalk. Woody portion of the stalks are removed by crushing between two metal rollers which separates fibers. They are then separated between themselves - longer from shorter. Longer, softer ones are then spun into yarns and then woven or knit into linen textiles...”.
Ancient Origin, a wonderful history website, states the obvious “...There is no question as to why so many cultures adopted linen as their main cloth for clothing: wearing linen is an absolute pleasure. Linen cloth is known for how it relaxes next to the skin, how it drapes and wrinkles, and how it softens and ages over time. Linen is easy to wash, absorbs water without shrinking or warping, and is beautiful even when left undyed. The weave of the fabric gives it a luscious texture that looks great next to wool, silk, and other natural fibers. It is probably most revered for its breathability and ability to wick sweat and moisture away from skin, as well as it’s resistance to rot and insects...”
Linen is available in so many forms; linen gauze, linen voile,  handkerchief, mid weight, heavyweight, canvas. There is a linen for every need. I think that Irish linen is perhaps the best known. They produce the finest quality linens and have been doing so for eons. Recently I have also discovered a wealth of linens from Lithuania...they are varied, beautiful and of relatively modest price. I have ordered them Croman ETSY purveyor, Dace Reihmane. She has an excellent command of English...I wish I could speak Lithuanian as well as she speaks English! Her site is www.etsy.com/shop/textilesupplies
Perhaps the largest online, linens only (with a few cotton/linen blends too),  source is ...as noted above...fabrics-store.com. Maureen sells all manner and weights of linen on her site and she offers daily sales and frequent bulk yardage specials. That is where my new linens came from. I have bought her standard mid weight (IL019) before but had no idea how much softer the “softened” linen versions were until I ordered this beautiful green...called, fittingly, Oasis. It is soft from the get-go. The other fabric, a “mixed natural”, beautifully slubby, mid-weight, softened up beautifully after a hot water scrub wash and a session in the dryer. Luscious fabrics that have already been washed, lightly ironed and are now ready to cut and sew now. My cart is full again and ready for my next purchases. 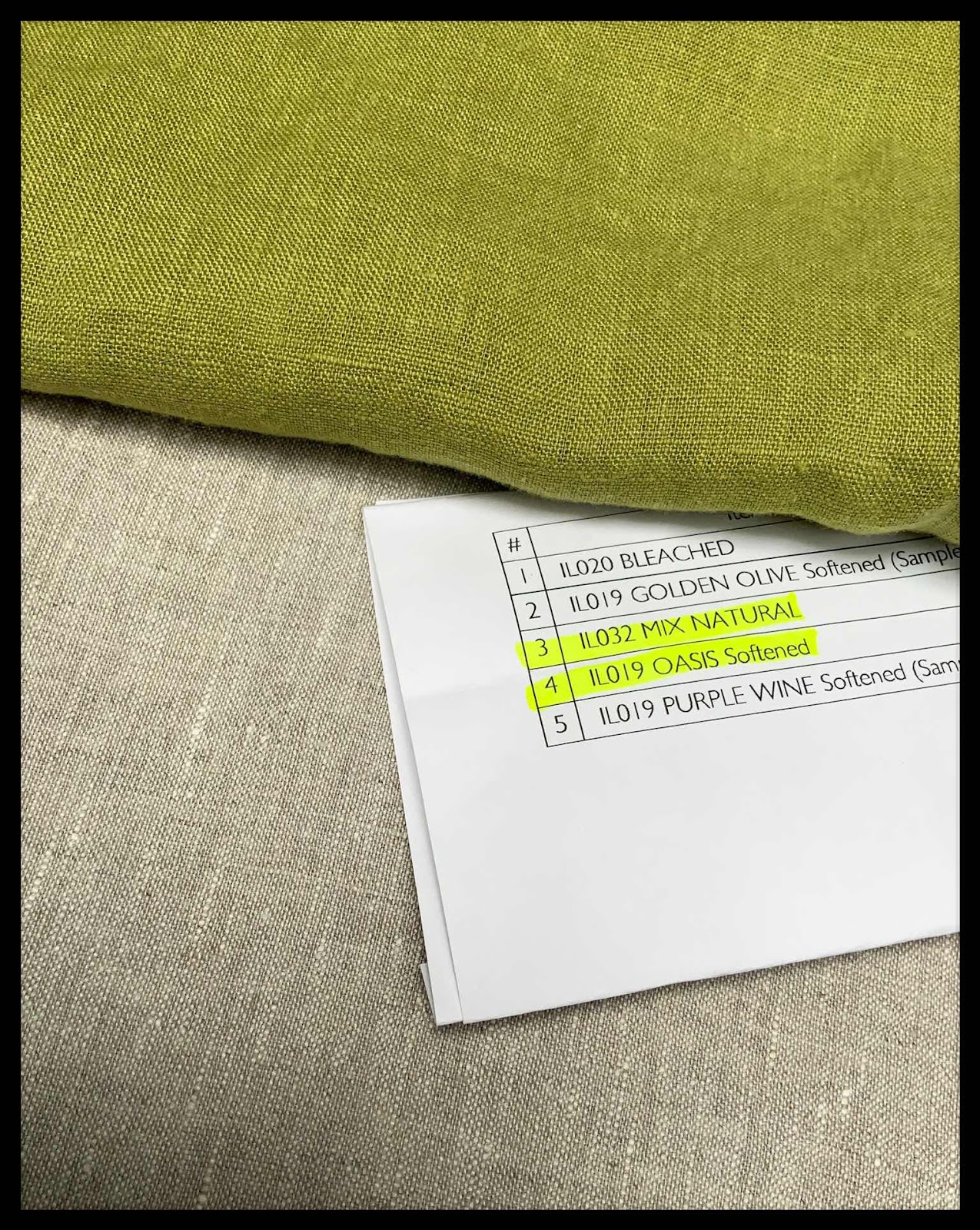 This is “in my cart” for next time....did I mention that samples are available for $1.50? Of course samples used to be free from almost everywhere, now “free” is the delightful exception rather than the rule.  I just ordered some samples of fabric from Mood Fabrics today and they too were $1.50 each. 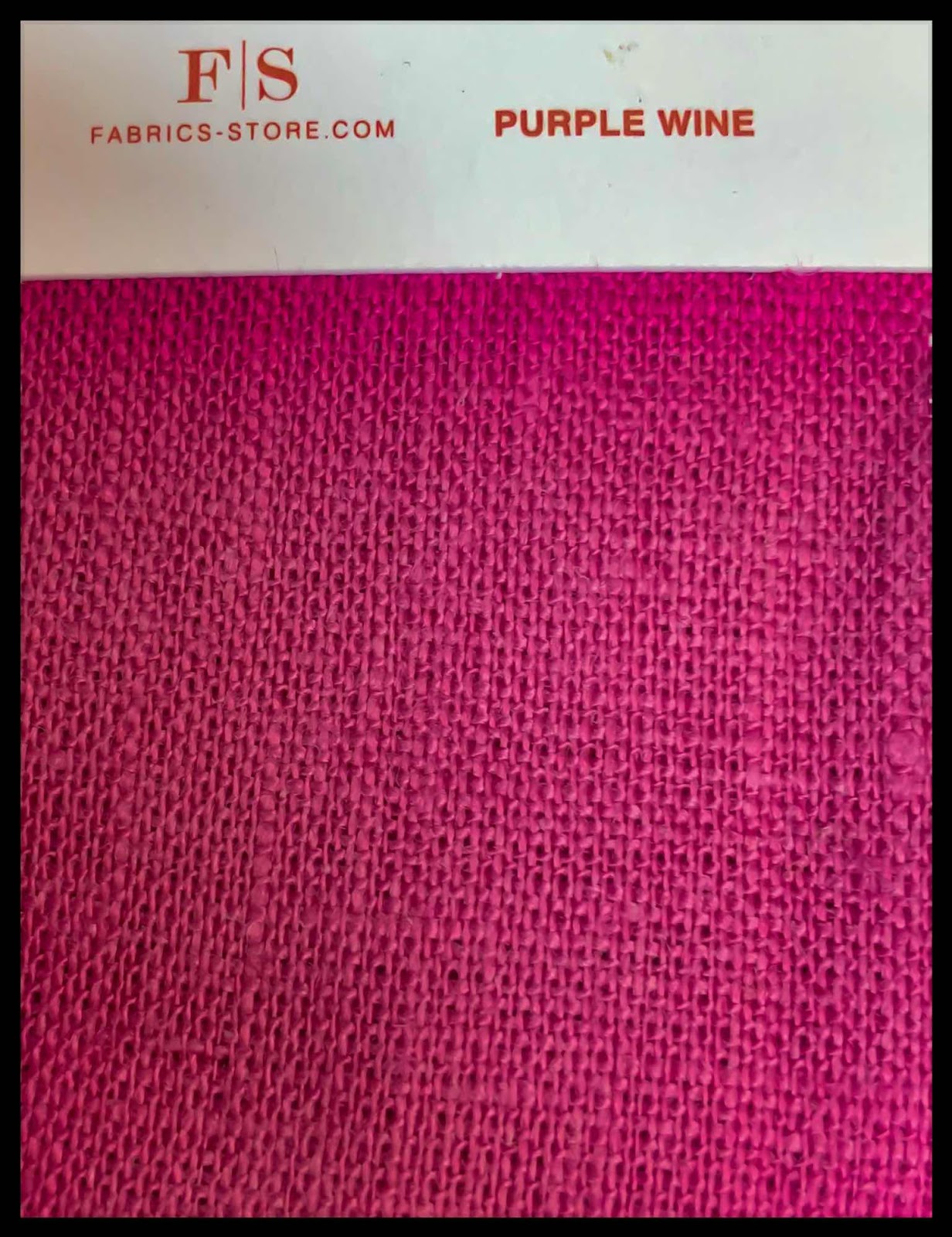 My line is slated to become new summer pants...made with a Cutting Line Designs One Seam Pants pattern (pattern number 13171) that I think will be close to the Flax Designs original that I fell in love with so many years ago. Sewing pants is something that I have shied away from and it is time to conquer my hesitation and fear.