The sweaters from the book "Knit Swirl" by Sandra McIver are really unique in many ways. Unique construction method and unique patterns. Very flattering to all shapes and sizes. I've never been much of a sweater wearer - or knitter. I prefer to knit shawls. These sweaters were unique enough though I knew I had to give one a try.  I chose to make a size 3 - the largest of the patterns not because I'm that big (although plump may soon be a reality!) but because  I wanted a big "snuggle coat". This pattern is called "Shades of Grey". I chose to use one of my personal favorite yarns - Malabrigo Rios (a superwash worsted weight) in color #869 Cumparisita rather than the Cascade Rustic yarn that was suggested. I did get on Ravelry as asked Sandra if she thought that the Malabrigo would be a decent substitute and she agreed that it should work. I bought 11 skeins so that I would have enough for a scarf and a pair of fingerless mitts to go with the sweater. I sure wasn't going to throw that kind of money away by not finishing this sweater!

I began knitting this in May and, after several failed attempts to get the circular join done correctly, I nearly caved and shelved this project right away. I persevered.  You're dealing with a huge number of cast on stitches in this pattern (400+) and even following the simple directions to ensure that your stitches are not skewed - I failed. I failed three times before it worked. With that sort of beginning I knew that if I had to frog anywhere again it would mean that I would put the project away and never, ever, work on it again. I had to plug along and go with hope. 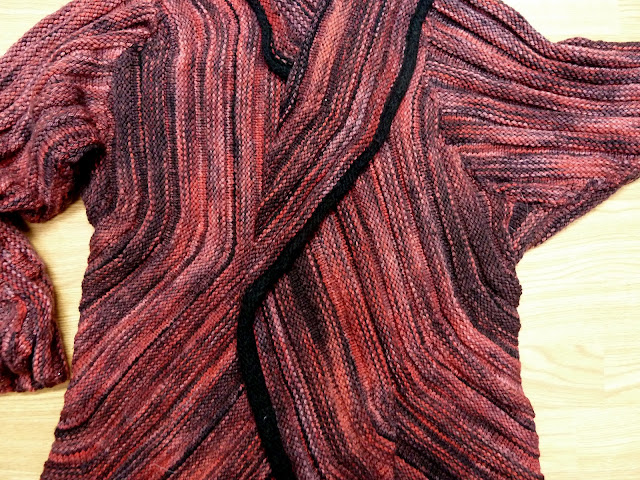 The pattern is simple enough really - so simple and monotonous enough that I just knit along forgetting about decreases! Oh no! The construction is made of welts. 5 rows of knit, 5 rows of purl. Each 5 rows equating to one welt. You may be able to guess from that how I managed to forget the simple directions on decreases- especially in the evening after a day at work! I just kept on knitting or purling away. So I was left with some serious mistakes along the way - serious enough that I doubted that I would produce a wearable object. I kept on and hoped. Knit and hope. Knit and hope.

I finished it this weekend. I'd had only the final seam to do for a couple of weeks and finally decided that it was time to wrap this little project up! Because of my inattention and myriad mistakes I had doubts that it would even be wearable but it turned out to be far more forgiving than I could have hoped for. Perfect? Way-y-y-y NOT. Wearble? Eminently! The sleeves will need to be frogged 10 inches each since they reach nearly to the ground (another mistake) but all in all it's good news. As I knit this 'monster' I was certain that I would never make another - but now as I snuggle in it I think I may just have another go in another pattern - and maybe try a size 2 - with more perfection in mind! One of the beauties of this pattern is that any size will work really - A size one fits me but it's a it snug and far more fitted that I wanted. The 2 would have been fine - but i wanted the snuggle factor. I might try a pattern that is shorter (this is a longer version) next time. It's comfortable, unique and yes, it's delightfully wearable despite my many knitting blunders!!
at September 04, 2012
Email ThisBlogThis!Share to TwitterShare to FacebookShare to Pinterest
Labels: kn, knit, knit sweater, Knit Swirl, knits, knitting, sandra McIver, sweater