When I think that I haven't produced anything I tend to think about where all of my time went.

That happened to me today, as I checked in here. I was amazed to see how long it has been since I have posted anything! One would think that I had fallen over a cliff or something. At first I thought that it must have been an extraordinarily slow month or that, somehow, I had not managed to use any of my time creatively; that I had had the ultimate of fallow month perhaps. Then as I reviewed where I'd been and what I'd been up doing I realized that I had been doing things all along. I suppose that I had no thought that any of it, at the time, was 'bloggable'.
Finding myself with a dearth of spendable cash this year I have made many of my gifts, and that is where much of time has gone. Because there are gifts involved I have not been able to post some of them here - so there has work been done that hasn't yet become blog appropriate I suppose! Not yet at least!


I made this lovely long scarf - perhaps for myself or perhaps someone else - I'm not certain yet. It's from a pattern called Magrathea by Martina Behm knit in Malabrigo sock yarn in the Marte (#121) colorway - purchased at my fabulous LYS - Island Wools. The original pattern calls for another bit of open lace work on the bottom which I decided was just a bit too much lace for me - so I truncated the design and am happy with the results. It's a long, wrapable, scarf design that I really like. 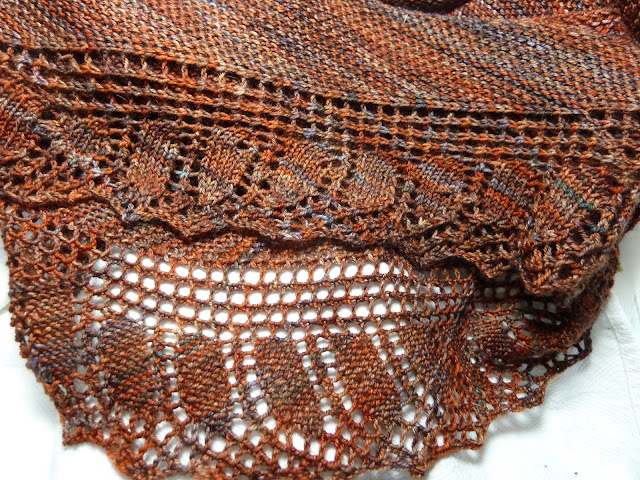 I've taken some time to make some selections of cold process soap recipes. Also on the hand made list  have been a selection of lotion bars, hand creams and lip balms. It had been awhile since I'd made soaps so I purchased am updated list of supplies and used up what had been on hand.

One of favorites is whipped shea butter. It made, primarily, of shea butter of course, with a couple of other beneficial oils mixed in. It's been the answer to my own dry skin woes. I'm waiting for another shipment of shea butter now so that I can make enough to give for the holidays

I made hard lotion bars that are the perfect gift to anyone with hard working hands; stitcher, knitter, gardener - you get the idea!
These lotion bars are harder than hand cream and made to be  more of a barrier protection. I use them all of time and decided that rather than spend so much money I could make them myself. I've tried a couple of 'recipes' thus far and find they are both good. I'll be auditioning other formulas as time goes by until I uncover the secret to the perfect combination of hand loving ingredients.
I gave making lip balm a try - and found that it was easy to do. I'd thought that filling the tubes would be a challenge, but it turned out to be easy-peasy, and the lip balm seems as good, if not better, to me as anything I buy. I added very, very little flavor, and DH asked me why it didn't have any flavor?! I guess I buy lip balm to work well and seldom give flavoring too much thought, but perhaps I should in future batches! The pink color really does not show up at all when you use it (so it's okay for DH to use) and comes from the smallest pinch possible of Cellini red pigment. One lucky thing is that we have a nearly local supplier of all things soap and body care supplies. They, of course, on the mainland for once in a blue moon I can order and not have to pay the most postage and take the longest amount of time to receive my supplies! Brambleberry is an excellent source for inspirations and supplies !
One of my "stand-by" CP soap recipes came out oddly for the first time ever. When I went to cut into bars it wasn't cutting up smoothly. I think I should have added more water to the original batch, but because of this mistake, I was able to try something I'd never done before - a process called "re-batching".  Essentially, you grate up the soap that you have made and then use a crock pot to "re-batch" or melt it down again and, for this batch, I added the extra water that I thought was needed. The process worked well and gave the soap - which has an ample amount of calendula flowers in it- a more interesting texture and creamy orange-yellow color.

The soaps all have to cure for awhile longer. I should have made them earlier in November to have the fully ready for the holidays- but I think I will still be able to use some for small gifts.