My Wee Woolies and Colored Tips 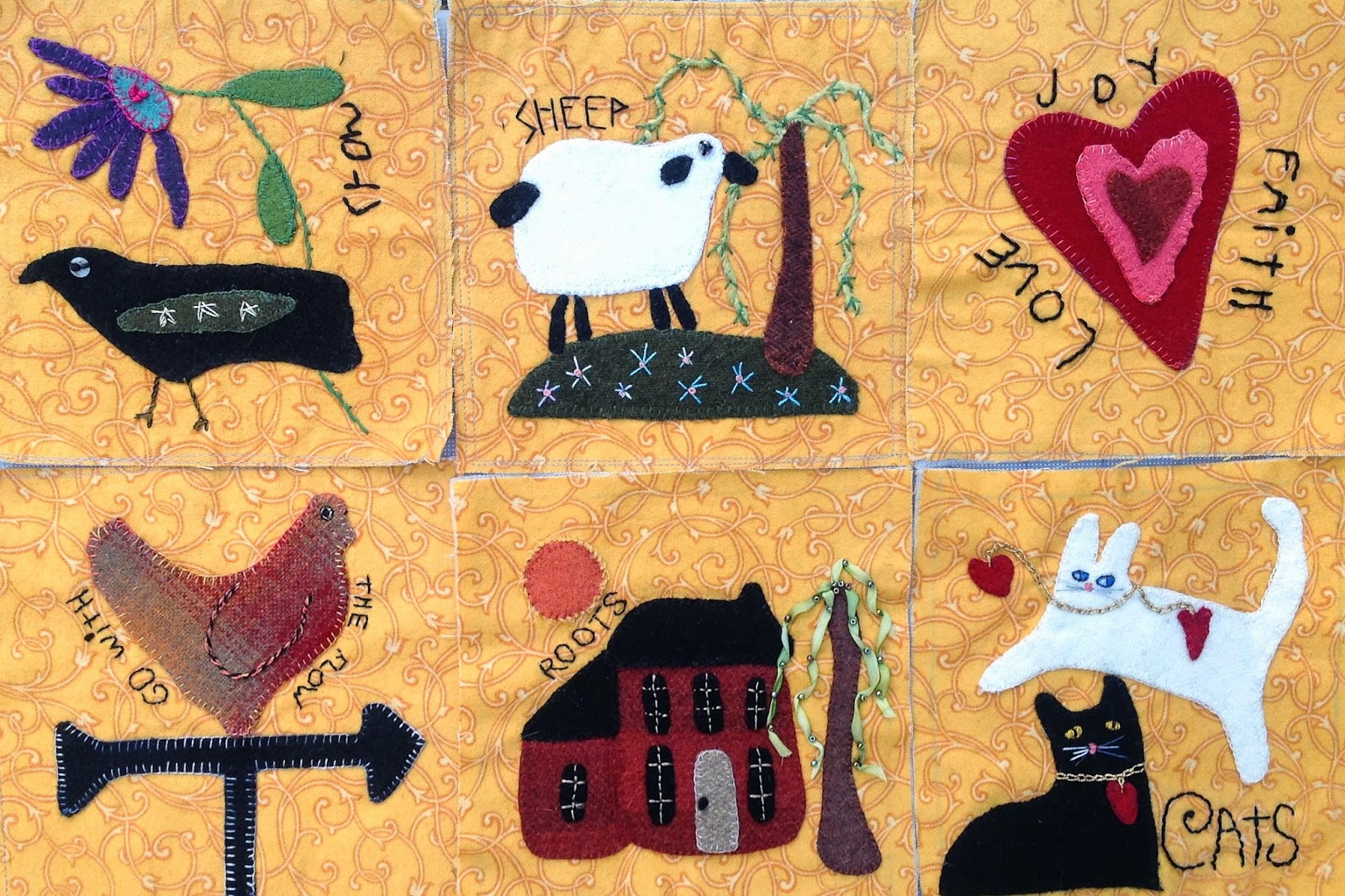 You know that yo have a good friend when she reminds you that you have been remiss in your blog post responsibilities. Thank you Janet!  Times slips by and I most often think that I have posted more often. I really DO ned to update some reviews for some excellent new books - maybe tomorrow for those. Also, if I put something on FaceBook, I tend to think that everyone already knows about it, forgetting that there are many folks with more common sense than I seem to have who simply don't do FaceBook!

I have been enjoying my small woolie embroidery endeavors. This is a small series that will be a quilted wall hanging. It includes some of the things that are close to my heart. The idea began with some small patterns from Lisa Bonjean, although I can't seem to find it on her website . As time went by I decided to make up a few blocks of my own, as our favorite things were not, necessarily, the same. 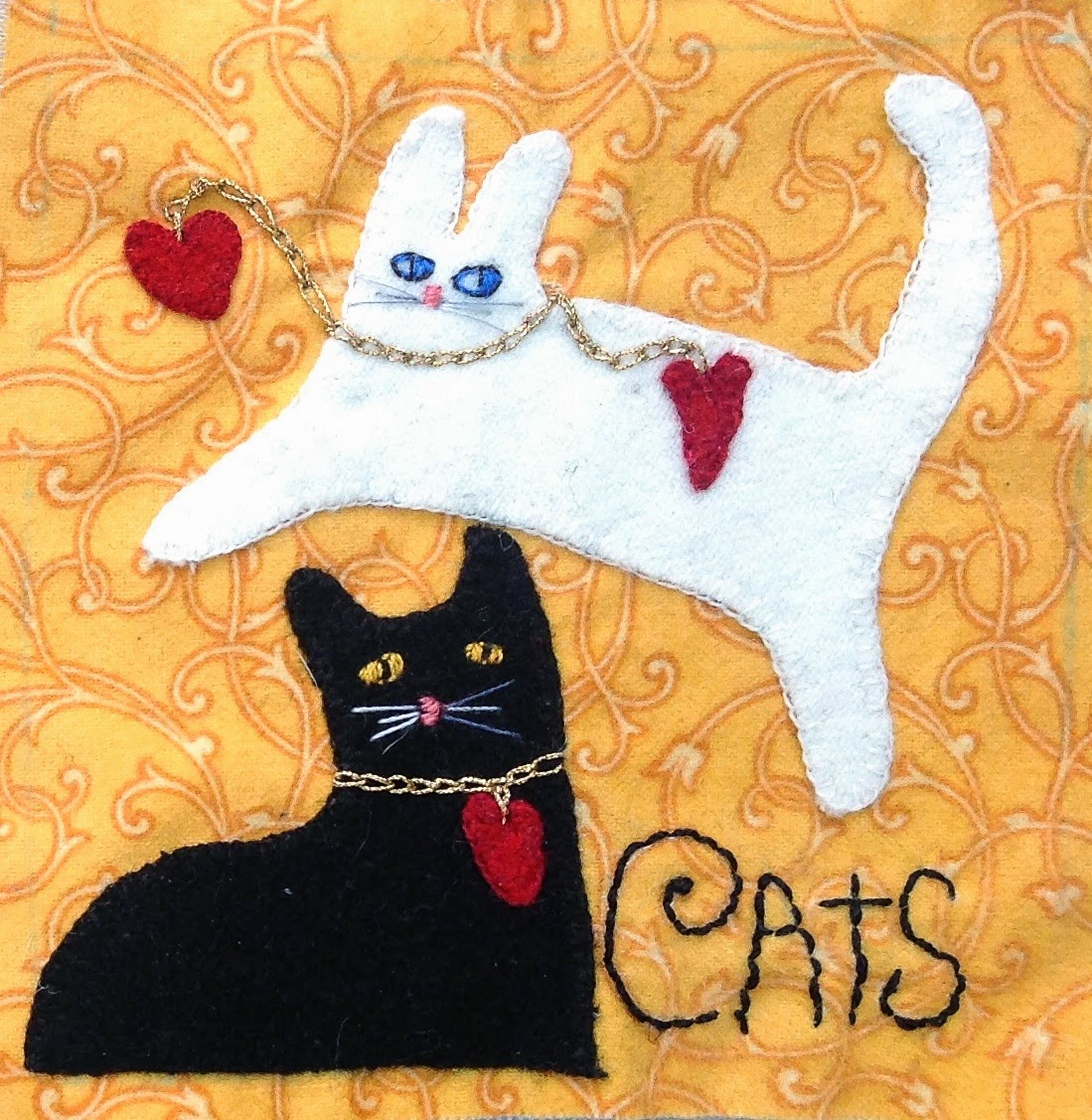 I fashioned these cats because my world would not be complete without them - well, I am quite happy to have only one purrfect one these days, rather than the nine plus one Samoyed that we used to have! 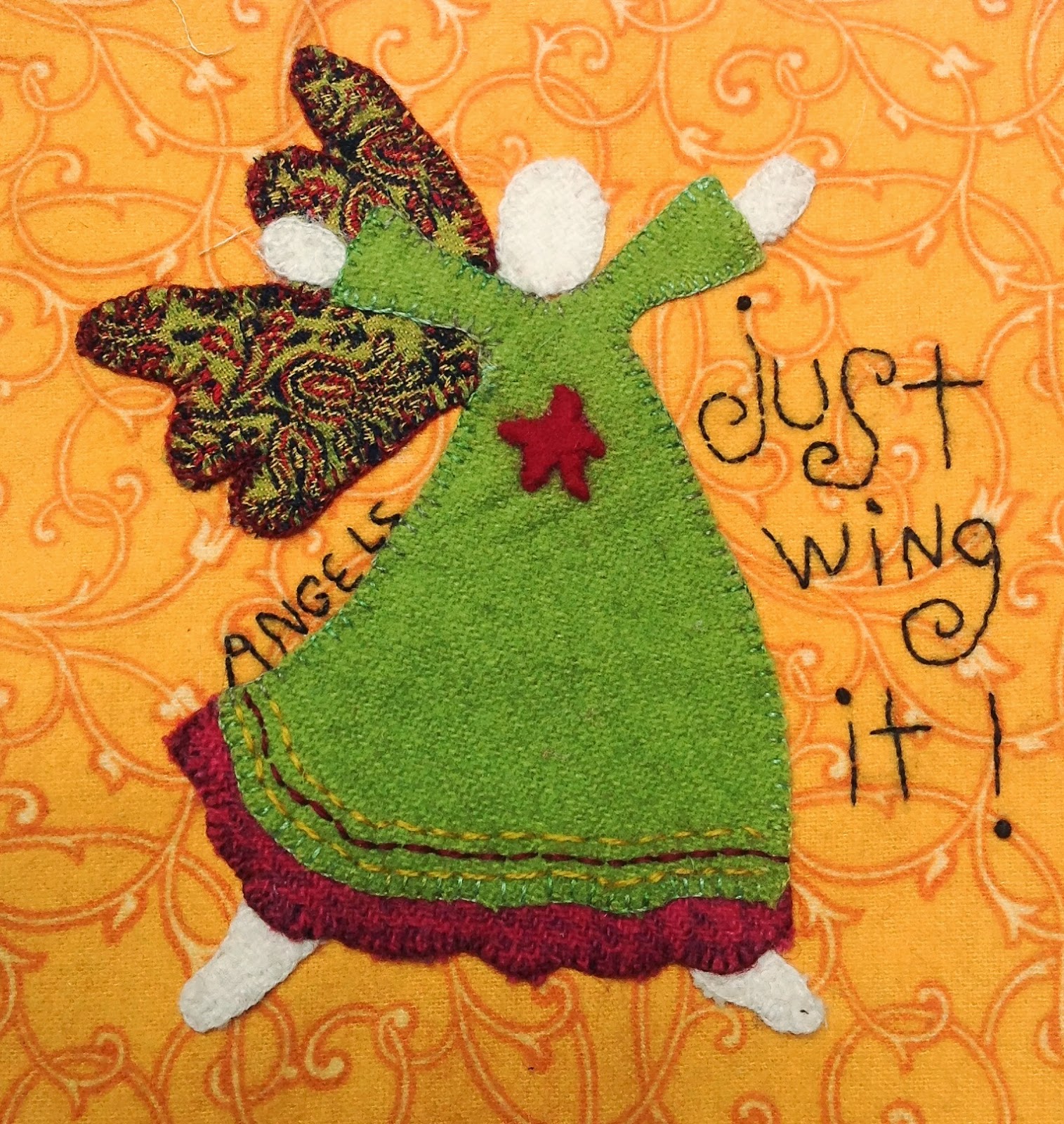 I have a strong belief in Angels, so they had to be included. The basic pattern for this one is from a Nancy Halvorsen's (Art To Heart), design. I still have a bit of work to do on the skirt and the face. I have to give a lot of credit, and more thanks, to my friend Jeannie, who sent me a magic box of wool embroidery supplies. The piece of patterned wool and the felt for the star are from here. She was so generous to share her wealth with me - it's kept me intrigued at all of the 'primitive embroidery possibilites' that I can try.

She also enclosed some thread samples - introducing me to Madeira wool thread. Once I tried it, of course, I had to order some! It's a  lovely quality and they have some unique colors. I have been having fun trying out different brands of wool threads. I love Aurifil Wool thread, and use it a lot. I am eager to buy and try some of Sue Spargo's customary brand - Genzania. I got to borrow some of this thread from a friend at our quilt retreat on Vashon Island this year. The line includes some really wonderful, unique colors- so I simply have to get some of it soon! All of the wool threads are pretty comparable. They are all a mix of 50% wool and 50% acrylic. Some colors (rather than the brand I think) seem to be softer than others. It's probably the dyes - the same way red strikes very differently when first dyed (or fired in a kiln) than the color that develops as it dries at times. One of my favorite threads to use for embroidery turns out to be a thread that I have had a lot of for a long time. It's  - Sulky's 12 weight.  I had used it a lot for machine quilting, but it's perfect for embroidery, and I am so pleased that I have a good selection. It's available  in 'blendables' (variegated) colors as well as in lots of wonderful solids.

Thank you again Jeannie for all of your unexpected and very treasured treats! 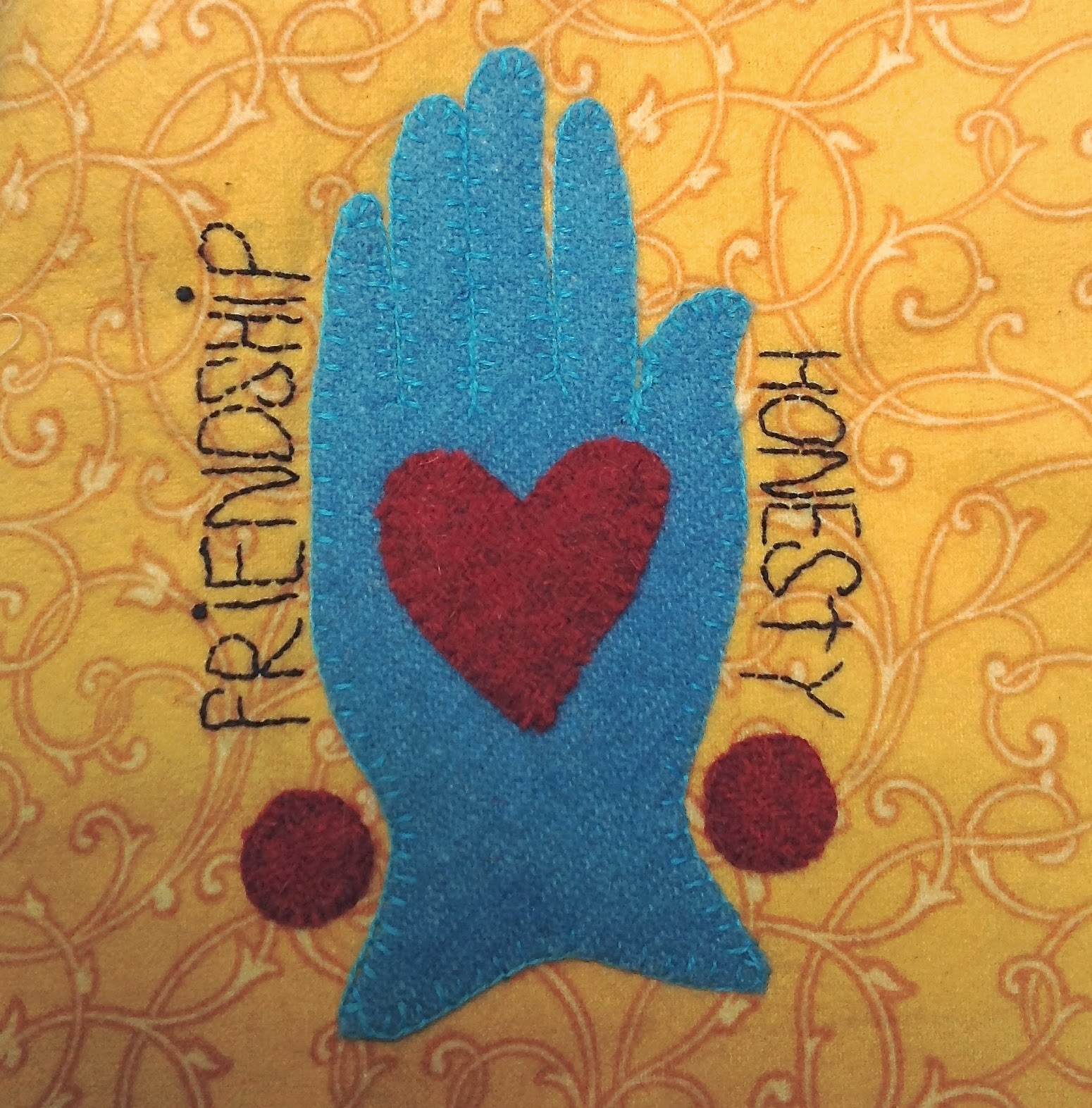 This block is another that I winged. I love the heart in hand symbol and it always represents friendship, loyalty and honesty to me for some reason. This block is not finished - and still has quite a bit f work to go. Sorry for the shadowy picture too! 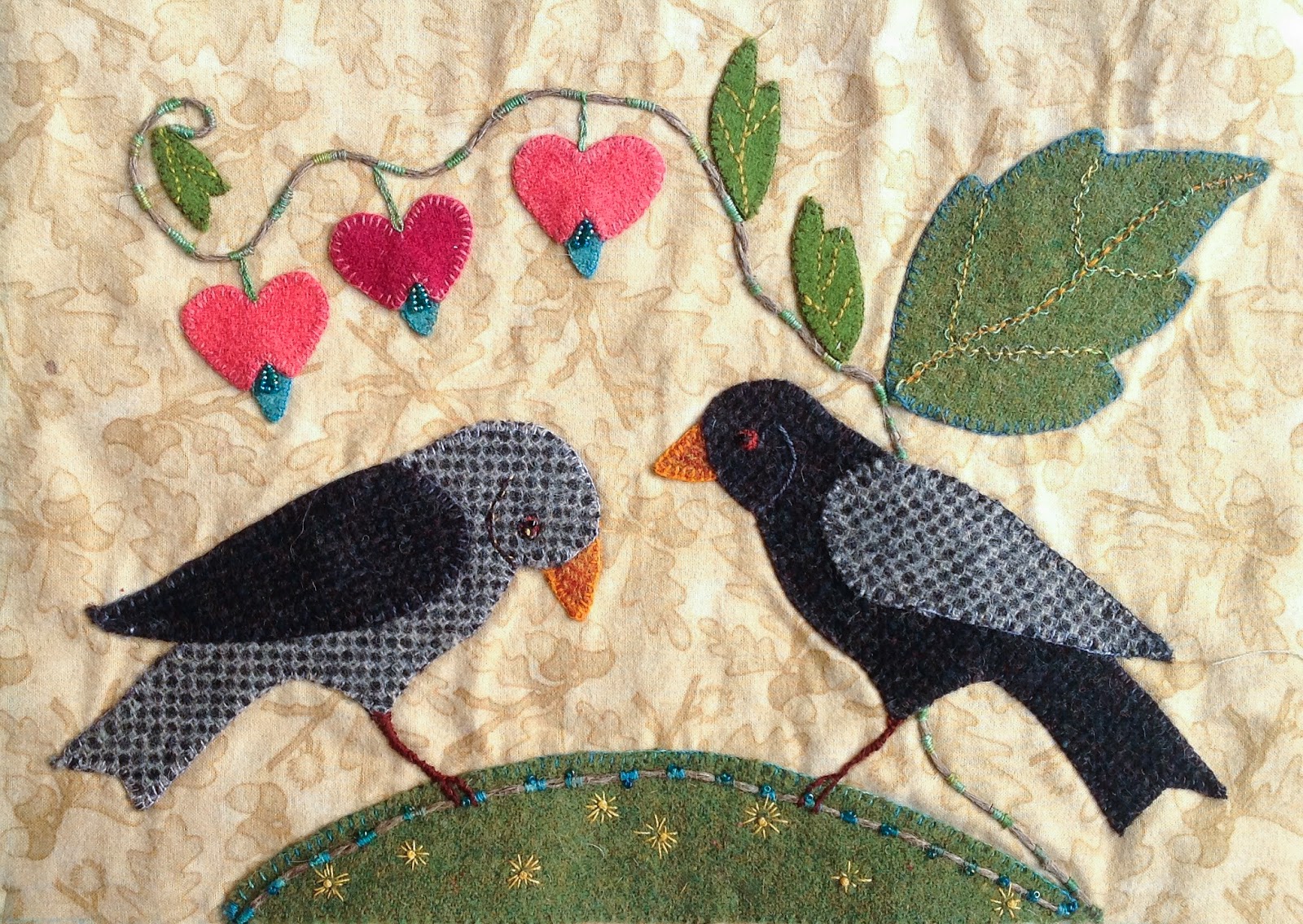 This pattern is one of a pattern set designed by Bonnie Sullivan. The set is is called Bertie's Year. There are several places online that offer this as a BOM set. I got mine through Shabby Fabrics, but a wonderful shop called Quilting By The Bay offers many options for the pattern - or set. I loved it because it's bird oriented, and as a crow lover, mine version of the blocks will be crows rather than the brown birds of the pattern.

I am getting my 'fat' envelopes every month, but I chose to make my own version for this one - which may be the one for April.  I will most likely add some words - but right now it's all rattling around in my head. I loved using simple couched jute for stems - it was quite effective I think. I chose the kit that includes laser cut fabrics of Bonnie Sullivan's excellent quality "Woolie" flannels. Having the kit makes it all almost too simple, but I knew that I would want, at the very least, the border designs, even if I wing it and make my own 'crow' version.  he folks at both of these shops are lovely and helpful.

IF YOU ARE NOT INTERESTED IN MY NEW
NAIL POLISH FIXATION YOU NEED NOT READ ANY FURTHER !

My other, rather odd and highly un-anticipated, new passion is nail polish. I know - this is like being a teenager again!  I'm almost embarrassed about it, but I love it! It's play time for me. One might ask why me? Why now? How come? I ask myself the same questions nearly every day!

I have very dry, very brittle, very weak, peeling, ridged, ugly nails. They never would grow, but would always break along a ridge. I used to buff them out - which helped, but of course, that also made them weaker by buffing out the ridges, although my nails were shiny at least.
The last time that I had 'nails' was back in the early 90's when I was chasing the glass ceiling in the corporate world. I had acrylic nails back then and had to have them tended to bi-weekly. When I left that world behind, I left my reasonable nail appointments behind as well. Let me tell you though, removing those acrylic nails was unpleasant. My nail bed felt somewhat jelly like for a week or so afterwards.  I had moved to live on a rural island where few people 'did' their nails back then, and those that did, paid a lot for a manicure.

As I have recently had time to think about the sorry condition of my nails, I started to look online to see what was new, and if I could figure out how to make them look a bit better. Being able to research online has been a huge thing for me. It's so much fun to see what people are doing with their nails these days - some of it is amazing to my eye and some of it is just a wee bit over the top for my taste, but it all interesting. I love my little nail ritual now, and it does not take much time - I can change colors when I feel like it. Thanks to new faster drying lacquer top coats I no longer need to spend much time waving my hands to dry my nails either!
Some things had definitely changed in the nail polish world over the past 20 years !! Most of the nasty chemicals have been removed from nail polishes, it does still smell, mind you, but not as badly as in the days of old. Zoya is a front runner in the chemical free variety (they tout vegan!) and, oddly enough, it was a Zoya color that is the only bottle of nail polish that I had kept from the 90's. It's in perfect condition, but I have not used it yet because it is a bright orangey red, and I have not been drawn to reds yet (because I know I will at some point!) for some reason. Other brands that I am aware of who also have ridded their formulas of chemical content are OPI and China Glaze. I think most of the nail polish manufacturers now limit the chemical content actually - but I know and use these three brands a lot - along with a few Indie manufacturers that I know limit their content as well. Available colors are so much better now too. If you can imagine it - it surely exists as a nail lacquer now. Formulas are more long lasting, and are so much more chip free. There are so many different finishes now too. From ultra glossy 'jellies' (which tend to be sheer and buildable), to matte, sands and textures (not for me), creams, shimmers, satins, foils, glitters, magnetics - a dazzling array of colorful choices.
But what made my nails stronger again?


As illogical as it may sound, for those who know me especially, I am no fashionista, but I love to look at fashion, and nails were on my radar.

I think the one thing that has most likely made the most difference is using OPI Avoplex cuticle oil conditioner regularly - I use it a lot and I love it. Before I discovered that though, I started using an OPI base coat for natural nails and used it along with their top coat. Next, I added OPI's  Ridge filing base coat (which is, in my mind, a miracle worker ) and neutral, light colored of nail polish.

My nails became so much stronger. No more peeling or brittleness. Of course it did not take long for the need of more dramatic colors to pull at my "I want that" strings and now I relish each color change and I enjoy combining color and some bits of design. It's all just because it please me to do so, but the effect has been that my nails, that have not grown for more than 20 years on their own, are now so much healthier!  I never thought I would grow one of my sad, very ridged, nails - and it too is now strong. Who knew!

My friend, Sarah, also now uses nail color. She uses a new color system that lasts for at least 2 weeks. It's called Gel Nail polish. It's applied like any regular polish but it is briefly cured under either a UV lamp or a LED lamp. I am not sure what she has done. You can buy kits to do this all yourself, but I like to change color often so I have not invested in the system. The other drawback for me is a limited color palette. I am too fond of funky colors now to stay within the lines of the Gel palette, although in the future I might try it just because it does last so long! Sarah swears by it, and I do hear good things about it. I think that there are 2-3 well known brands of it on the market. I'm not sure about chemical components, but a nail lacquer that lasts two weeks or more is rather awesome I think!
on May 03, 2014
Email ThisBlogThis!Share to TwitterShare to FacebookShare to Pinterest
Labels: applique, China Glaze nail polish, embroidery, hand appilque, hand embroidery, nail polish, OPI nail polish, Wool Applique, Zoya nail polish