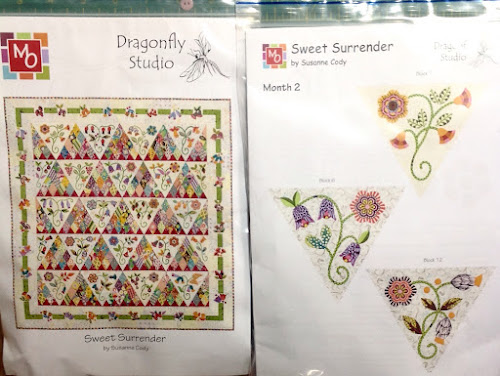 I decided that this coming year would be devoted to re-engaging in my love for hand appliqué. To that end I fell in love with this pattern, called Sweet Surrender, designed by Susanne Cody and sold by Material Obsession (the well known shop and home of Kathy Doughty) in Australia. In order to save just a bit on the high cost of international postage I opted for shipping every other month...so I just received two months in this first shipment. The fabrics that are included are shown below...in their just unpacked bags! 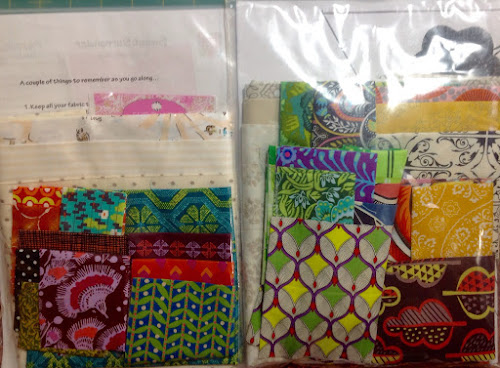 Typically, I am not a huge fan of BOM's. I always seem to want to tweak patterns -if not downright diverge from them- and I often prefer to use my own fabrics. That being said, I was VERY curious to see what fabrics would come from the 'land down under' and so I ordered the BOM..figuring that I could always choose to use- or not use what was sent.

Material Obession does a great job with their BOM's. Directions are clear and well written. Fabrics are well chosen and appropriate (though one piece of background fabric is just too cute to use and I will save it to use in another way). I am looking forward to sewing this project....although can I just say that making almost 1/8" stems will soon become second nature for me ...or at least I hope that they will.....otherwise you may hear echos of some choice words of frustration! I look at a pattern and think "oh gosh ...that's a pattern that I would like to make" and I neglect to notice some of the more niggling details like 1/8" stems! I like patterns with a lesson to teach (witness Jen Kingwell's 'Smitten' that I did to overcome any lingering dislike for 'set in' seams (the dreaded 'y' seams) and so I expect that the stems in this pattern are my lesson...though after finishing the first stems it may not be too difficult anyway....just a bit time consuming. I have, thus far, cheated and made a scant quarter inch stem that I folded to get my eighth inch. This makes for a slightly thicker stem...and it will work for some fabrics but may be too bulky for others...we will see!

This will be my hand-sewing project for the 2016. I have TWO machine projects planned....although the second one may become a half machine and half applique project. The first is the very traditional "Farmer's Wife 1930's" (although I had not planned on doing this one I decided to go ahead with it and also with a 'no guilt' policy if I fall behind) which I joined in order to use up a fraction of my 1930's fabrics stash. You have seen a block or two that I have already posted. Angie from GnomeAngel and Marti Michelle of fabulous template fame are the leaders of this huge project...the FB group,is HUGE!

The second project may have to be kept under wraps for some time...as a larger project within the concept of the quilt is being considered. It is a large, traditionally based quilt that I am going to work in either Parson Gray fabrics (if I decide to let my personal exchequer spring the cash to get them) or else it will become a modern-scrappy version (do you think that 'modern' and 'scrappy' are somewhat oxymoronic?!)

Either way I think that my project for 2016 is pretty well filled...with the exception that I know I will want to make some more shirts when the passing piece of perfect fabric calls to me...

Has anyone else considered what they want to do in the new year? Generally I don't....and for the first time in many, many years my holiday cards have not even been considered much less ordered. This is the month that I generally begin writing em...the envelopes...yes, I am already behind!

For those of you who have gotten read to this point and who use links from within a post....do you prefer :

A link that opens to a new page or

Inquiring minds need to know! Thanks so much.

Cheers to the beautiful season of Fall! Let's all take some moments to stop any the color and scents of the season!