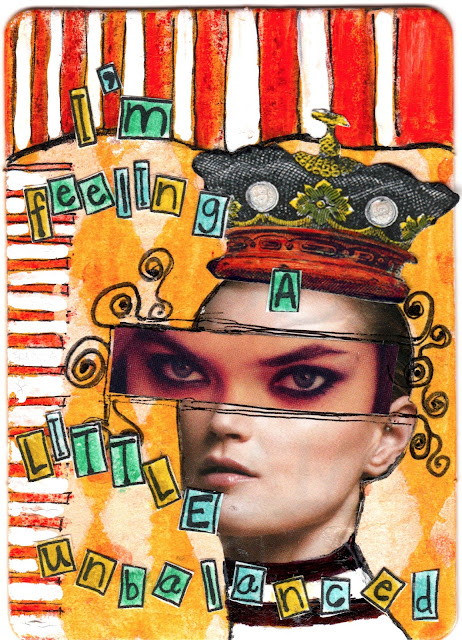 I have to say that not having a schedule to have to hold to is a really wonderful thing! yes, I really DO like this part of it!

Over at heARTist Trading Cards the theme for June was Zetti. I'd been running a bit late was had be a bit frazzled, but I had thought that I would have no problems coming up with something for this theme. I had never done any Zetti before, but I thought it would be "a natural" for me. Not!! I had elements all together and ready, but I just could not find pleasing proportions for the ATC size. I spent a day feeling like a failure; went to bed and got up to tackle it again. Finally, I found a combination that I liked and that I felt was good enough to send out! I made some of the side trade tags and sent them off. I had never made any tags either, but I wanted them all mailed so much that I forgot to take some images of them!

This week, after the full speed forward motion of last week and the early part of this week I was feeling just a tad off center for some reason. Perhaps I am being sensitive to the Mercury retrograde that is ruling the astrological heavens at the moment? Oddly enough, the thing that I found  that really calmed me down was making earrings!  I cannot imagine why, but it worked! I had so much fu playing with spirals and designs. I but the proverbial bullet and ordered some sterling silver wires.... using up my stash of silver covered copper wire now. Ohhhh.. I'm sort of stepping out!

I'm thinking about selling at least some of these earrings (I'm not even sure which yet!) for $25.00 per pair. I may wait until the silver findings arrive though. If you have an interest though and like a particular pair let me know, and I'll send you information. With the exception of the earrings on the lower left which use 16mm locally lampworked beads the other pairs are made with lampworked beads (from Etsy rather than local) that are only 11mm in size - or about 1/2 across the top.

I'm looking forward t playing with silver components and finding - higher cost, but I hope more durability. I'll be soldering all of the connections in the future. More time consuming, but better quality I think.

What fun to be able to say - who knows what tomorrow will bring. I do have several thoughts though! 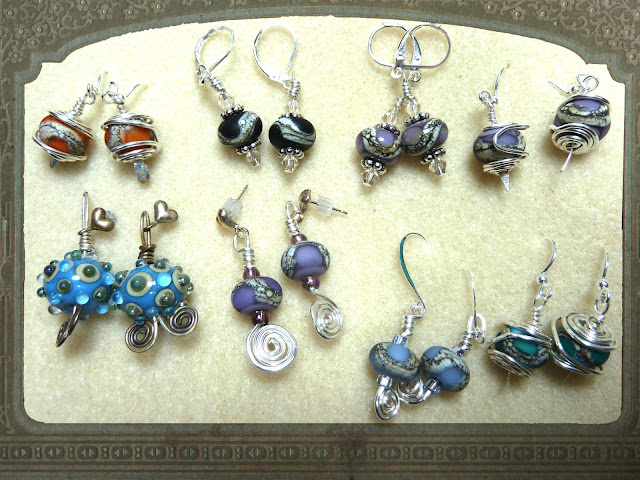