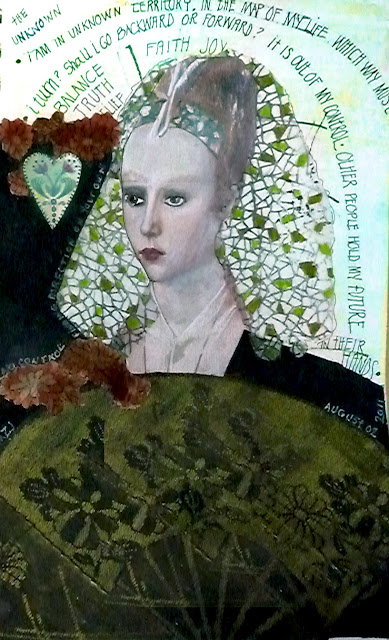 I was thinking about how difficult it can be to know what to do when the map of your life heads into the unknown and others have control of your direction. Late last week I had decided that this was a time in my life when I, indeed, had no control over my immediate future. I decided that the only thing I could do was to try and remain as centered as I could (and that was tenuous at best for a few days!) and carry on with  'real' life - that being my life away from work.  At home nothing had changed. It was still the place that I can relax, find center and continue on. I love the stability of my life - which is really quite funny because when I young and foolish I used to think stability was highly over rated - if not down right boring. Now I love my routines and my comforting stability. Amazing how your core beliefs can change as you grown up ! 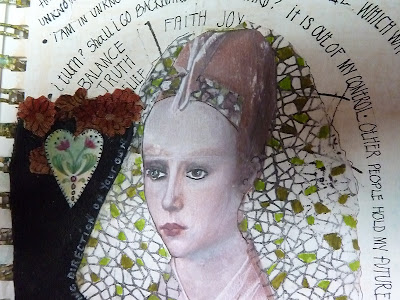 You would never know that I love photography by these photos. It was drizzling outside and I just couldn't get the lighting consistent.  This journal page contains some vintage silks, some cottons and inks. I used my favorite new 'tool' - plain white tissue paper - to make the 'veil'.
For those of you who believe a bit in planetary influences a reminder.
Mercury is retrograde:
Retrograde Begins:        Aug  2  2011    01°Vi12′ R
Mercury Goes Direct:   Aug 26 2011    18°Le42′ D
Why do I care about this? Because I have found it to be an influence that does affect me and I do pay attention to it. There are many explanations about this thrice yearly (though last year we had 4 passes) phenomenon. In searching for a decent explanation I found the following description courtesy of
"the green duck".

".....Retrograde Mercury is the most commonly known astrological signature for Murphy's Law ("If something can go wrong, it will"), and is one of the first features intermediate astrology students learn about. Say it to a seasoned astrologer and you'll likely get an amused smile and some delightful stories about how things can get quite unexpectedly unhinged.

Computers crash, software develops unexpected glitches, traffic jams ensue, telephone service snarls up, letters get lost on the mail, machinery breaks down, new projects fail. Ah, yes, the trickster Mercury is up to his old pranks again. In fact, at least three times a year for about three weeks each time Mercury has his way with us......."
on August 02, 2011
Email ThisBlogThis!Share to TwitterShare to FacebookShare to Pinterest
Labels: art journal, art journaling, journal page, mercury retrograde