When What To My Wondering Eyes Should Appear?

'Twas the day before Tuesday, and all through the house
not a creature was stirring, not even a spouse

When out on the deck there arose such a clatter,
I sprang from my chair to see what was the matter.
Away to the window I flew like a flash
tripped off the shutter, and whipped back the sash.


The moon on the last of  a sunshiney day
gave the lustre of evening to objects that strayed,
and, what to my wondering eyes should appear,
but a miniature goldfinch and a large boyish deer. 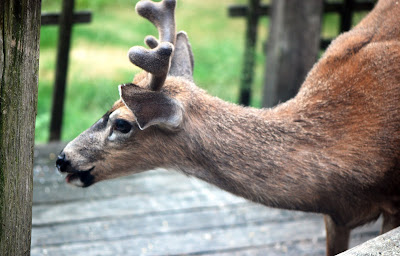 We really did hear a racket and wondered what it could be. I thought at first the raccoons were making earlier than usual. They're up to teaching their new babies the ropes these days. DH got up and surveyed the commotion and said I had to to out of my Lazy Girl to have a look - and, indeed, what to my wondering eyes did appear but a brash boyish deer cleaning up the scattered, leftover, birdseed!  I took a tumble as I dismounted from the table where I had been snapping pictures. I took two large plants and a container filled with art supplies down with me. The camera was safe though! Phew! I pray that my 'fusions' are stable enough to have taken the fall - thus far all is well - maybe a bruise - more to ego than my body as I used to scamper up and down from places without thought. So, what did this teach me? My balance 'aint what is used to be .... and that deer have no shame. I chased him off when he came for my hanging basket.
Later on her brought his girlfriend in for after stroll snack. Only in a rural area! I love it ! 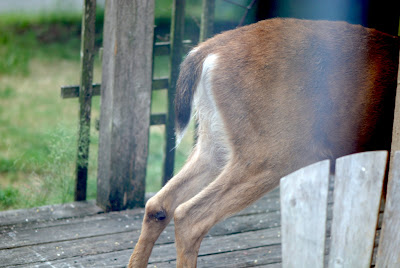